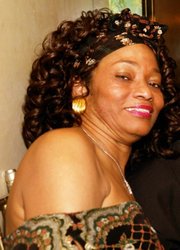 Shirley Scott to be Honored at Great Woman in Music Event

Big fun was had by all as Great Women in Music celebrated Shirley Scott for her long-standing contribution to business and community.

Rep. Charles B. Rangel proclaimed Oct. 3, "now and hereafter," "Shirley Scott Day." Scott also received an official letter from State Sen. Bill Perkins (who was in attendance) and a citation from the office of Council Member Inez Dickens. The icing on the cake was when the honorable Theresa Freeman presented Scott with a key to the village of Harlem.

Creole Supper Club on the East Side was packed to the rafters with friends and well-wishers accompanied by music from the JC Stylles trio. The special guest list for the evening included radio personality Flo Anthony and iconic concert promoters M. Morton Hall and Bea Montgomery.

R&B artist Natasha C. Coward was on hand to award Scott with a check from her record release fundraiser for cancer awareness. The stellar night was co-sponsored by Healthfirst, Moet-Hennessey USA and Black Opal Cosmetics.

Here's wishing you a wonderful week ahead.