Robert Clinkscales honored with a park in his name 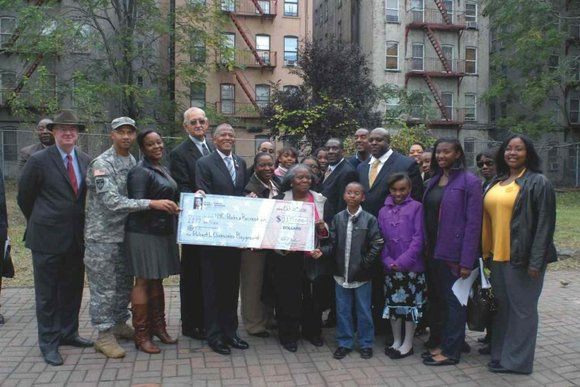 Robert Clinkscales honored with a park in his name

A cool, crisp and sunny Friday afternoon in Harlem set the scene for a ceremony honoring the namesake of a half-acre piece of land.

The Robert L. Clinkscales Playground and Community Garden isn't constructed yet, but it got its official introduction to Harlem with a ceremony attended by City Councilman Robert Jackson, State Assemblyman Herman D. Farrell Jr. community activists and family members of the late Robert "Bob" Clinkscales.

"Took a lot of work" would be an understatement. The story of the park's origin mirrors Clinkscale's work ethic: long, tireless and unrelenting.

Back in 1999, Frederick Wilson, a former Tenant Association resident of 210 W. 146th St., asked Clinkscales to help him identify vacant properties in the community and possible funding to build playgrounds for children in the neighborhood (providing a safe haven for children in the process). Clinkscales helped arranged a meeting between Wilson and Manhattan Borough Parks Commissioner Adrian Benepe to talk about the playground's concept and check out the vacant properties on 146th Street. Benepe told the parties he would commit to the playground's construction if they were able to secure the land and the necessary funding for the project.

Clinkscales passed away in 2001, but the work for the space continued on. Former Manhattan Borough President C. Virginia Fields allocated funding to NYC Housing Preservation and Development (HPD) for the purchase of the then-privately owned lot in 2002. In 2004, most of the funds for the lot were transferred to the New York City Parks & Recreation Department to complete the playground's assemblage, but the remaining $262,000 for "Bradhurst Urban Renewal Area Site 20" stayed under the HPD's control until construction of the park began. That's when Wilson formed Harlem Memorial Community Development Inc. for the sole purpose of advocating and soliciting more donations for the park.

In 2006, Jackson allocated $677,000 to the park's capital budget for the project and a year later, with the consent of Clinkscales' widow, Kathryn, Wilson asked the parks commissioner to name the new park after his friend and colleague.

In 2009, the HPD relinquished the remaining funds to the Bradhurst Urban Renewal tax fund, and after several meetings discussing the site, conducting land surveys and ground expansions and presenting the completed designs of the project, all things were a go. Jackson then donated an extra $500,000 so the project could begin as soon as possible, presenting itself in a check for over $1.17 million. Construction of the park will happen over the course of the next several months.

"I remember when Jackie Robinson Park was a depository for equipment, and all he kept saying was, 'We'll see this change,'" said Kathryn Clinkscales. "He started his community activism through city agencies. This is just, I don't know, final, because the last large project he did was Battery Park City." Clinkscales was responsible for much of the infrastructure of the parks and buildings in the area.