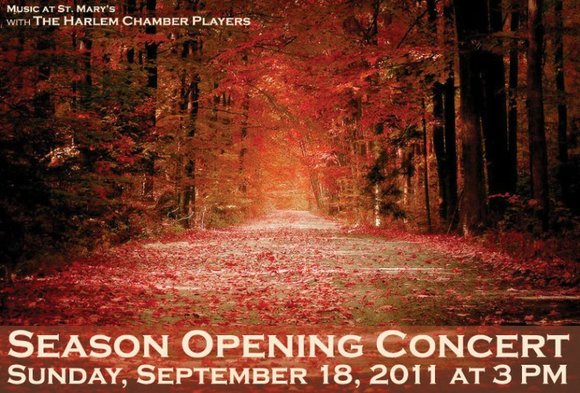 The Harlem Chamber Players are first when it comes to bringing high-caliber, affordable and accessible live chamber music directly to the people of Harlem.

"St. Mary's is an incredibly intimate and comfortable space, and the acoustics are really good," says Player.

The concert features Brahms' "Clarinet Quintet." "We love our fantastic violist Richard Brice," she says. "We always try to find beautiful music to show off his playing."

Guest vocalist mezzo-soprano Carolyn Sebron will sing Brahms' "Two Songs, Op. 91," with Evelyn Golz on piano and Richard Brice joining for the obbligato viola part. "Amadi Azikiwe, a violist and violinist, will play the early Mozart "B-flat Quintet," which I think makes a nice contrast to the somber music of Brahms," says Player.

Additionally, you can speak with these artists at the "Meet the Artists" reception held after every concert.

Inspired by the founder of the NYCHA Symphony Orchestra, Janet Wolfe, Player and Dalton created a summer music festival in the neighborhood of Manhattanville/West Harlem. The Rev. Dr. Earl Kooperkamp of St. Mary's, wishing to cultivate the enthusiasm generated by those multi-ethnic, multi-cultural chamber music events, sponsored the creation of a permanent series. Wolfe signed on as a founding board member, and at 97 years old, she's still one of Harlem Chamber Players' biggest donors. "I hope to continue in her vein, creating opportunities for classically trained minority musicians," says Player.

"My good friend Lisa Arkis is playing flute, and Suzanne Ornstein will be joining us for the first time as solo violinist. Violinist Ashley Horne opens the concert with the 'Violin Concerto in A-minor,'" says Player.

Last season, Player received an email from Wilmer Wise saying, "If you ever need a trumpet player, call me."

"Wilmer is a real heavyweight," said Player, and she seized the opportunity to program him for the spring finale concert on April 29, 2012. Wise will perform in Saint-Saens' Septet for trumpet, piano, string quartet and bass.

Initially, Player admits she had reservations about instituting a chamber music series, but she's encouraged by the growing community response.

"Our audience is growing," she says, "We program only the most beautiful chamber pieces that we think the audience will love and select the musicians who bring out the best in the music. We try to keep it real."

Tickets are just $10 to $15, but anyone unable to afford that price is welcome to come to the church to listen for free. Season subscriptions are also available for a limited time. Contact (212) 866-1492 or info@harlemchamberplayers.org.

Share your classical music news and events at suite.sounds@yahoo.com.