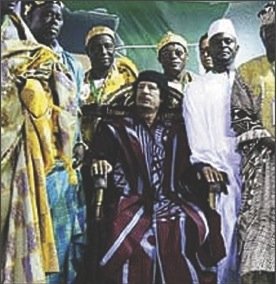 Col. Muammar al-Gaddafi's remaining band of loyalists surrounded in the desert town of Bani Walid has until Sept. 10 to lay down their arms and surrender to the forces of the interim government, according to reports from Libyan officials.

Rebel forces some 60 miles from the town are prepared to invade from eastern and western fronts. There are reports that Gaddafi is at this final stronghold with a potent force of supporters.

Meanwhile, the interim government or National Transitional Council (NTC) is negotiating with the loyalists, hoping to avoid what could be a major bloodbath.

Representatives from the NTC are also currently investigating charges that rebels have been killing Black migrants in Libya, accusing them of being mercenaries.

Hundreds of Black migrants, many of whom arrived in Libya during recent years seeking labor, claim they are being arbitrarily arrested, detained and sometimes tortured, if not summarily executed.

For a couple of days, the dilemma the migrants faced was overshadowed by the news that the CIA had collaborated with Libyan agents in the rendition of alleged insurgents.

Journalists embedded with rebels gained access to Gaddafi's former compound and discovered documents indicating a possible connection between the CIA and Libyan spies and agents. These allegations are still awaiting independent confirmation.

Meanwhile, on Monday, China admitted that its state-run arms companies had met with Libyan officials to broker arms sales with the Gaddafi government. This admission confirms documents found by a Canadian journalist in Tripoli.

Even so, Chinese officials said they had no knowledge of the meetings, which would have been in violation of UN sanctions if arms were actually sold. However, China isn't the only culprit. According to documents, some European countries and Algeria have also been facilitators of arms to Gaddafi.

"We have gathered evidence from many sources, including the main documents that were gathered here in Tripoli, that point the finger at several countries that had been supplying Gaddafi with weapons and arms, as well as intelligence officers," said Abdul Rahman Busin, an NTC military spokesman.