Progress and memory in Lower Manhattan 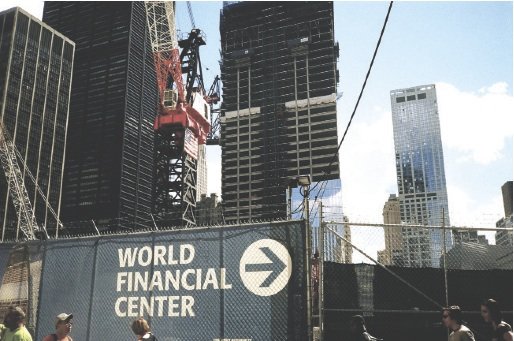 Progress and memory in Lower Manhattan

Those who had been to the World Trade Center prior to Sept. 11, 2001, might have memories of what New York City used to be but feel a sense of pride when visiting the National September 11 Memorial and Museum.

The event not only altered New York City's skyline but the nation itself, and will live on forever with the dramatic memorial that now sits in the space.

The site of the 9/11 attacks is still under construction 10 years laters, but visitors can still take in the spirit and pride of the reconstruction at the National September 11 Memorial and Museum.

The footprints where the Twin Towers once stood are large twin reflecting pools, nearly an acre in size, the largest manmade waterfalls in North America. A total of 3,000 names, those of the victims who died in the 2001 and 1993 attacks, are inscribed in bronze panels on the edges of the pools.

The names are stencil-cut into the parapets, allowing people to create impressions or rubbings of individuals' names. Lights will shine at night through the voids of each letter of the names.

More than 5,200 design entries from 63 nations were submitted, from which architect Michael Arad and landscape architect Peter Walker were chosen to create the memorial.

"Of all the designs submitted, we have found that 'Reflecting Absence' by Michael Arad, in concert with landscape architect Peter Walker, fulfills most eloquently the daunting but absolutely necessary demands of this memorial," said the memorial jury when it made its decision.

"In its powerful yet simple articulation of the footprints of the Twin Towers, 'Reflecting Absence' has made the voids left by the destruction the primary symbols of our loss. By allowing absence to speak for itself, the designers have made the power of these empty footprints the memorial."

While walking through the memorial, visitors are now greeted by nearly 220 of the 400 swamp white oak trees at the site. Crews selected and harvested the trees from a 500-mile radius of the World Trade Center, from the other areas impacted by the 9/11 attack: Pennsylvania and Washington, D.C.

"The trees will create a space of reflection and remembrance apart from the sights and sounds of the city," said Memorial President Joe Daniels.

Of note at the memorial is the Survivor Tree, which sustained extensive damage during 9/11. The pear tree was originally planted in 1971 at the World Trade Center site near Church Street. The tree was discovered about a month after the attacks and was nursed back to health at the Arthur Ross Nursery in Van Cortlandt Park in the Bronx. The tree now sits in the 9/11 Memorial Plaza.

The 9/11 Memorial Museum, still under construction, sits between the footprints of the Twin Towers and will provide visitors with the ability to commemorate the lives of those who died in the World Trade Center attacks of both 2001 and 1993. Visitors can also learn more about the stories of those who died during the attacks.

"In remembering the victims of the attacks and honoring those who went to their rescue, the museum will explore the very real impact of terrorism in the lives of very real people and their families, friends, colleagues and communities," said Memorial Museum Director Alice Greenwald.

"As a custodian of memory, the museum will take on the mantle of moral authority that will define its continuing and evolving role. This museum will do nothing less than underscore the absolute illegitimacy of indiscriminate murder."

The museum collection will consist of artifacts, photographs, audio and video tapes, personal effects and memorabilia that are still being collected. There will also be recorded testimonies and digital files and websites associated with the World Trade Center and both terror attacks.

"Today, for the first time since 9/11, every part of the new World Trade Center is under construction," said Larry Silverstein, president and CEO of Silverstein Properties. "Today, more than 3,000 construction workers shape millions of tons of concrete, steel and glass into iconic buildings that will soon reclaim New York's skyline."