Brothers for Life in NYC 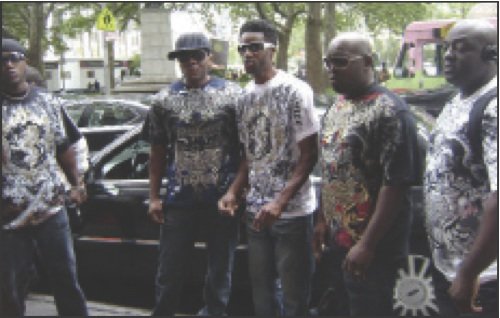 Brothers for Life in NYC

While walking by the Empire Hotel on West 63rd Street on my way to the Tracy Reese show, I passed five good-looking guys standing in front of a black limo parked in front of the hotel. They were gazing amusedly at two beautiful swimwear models posing in the hotel's store window.

At first, fashion was the basis of this story. However, after taking the shot of the live fashion mannequins, the five young men started to sing in perfect harmony.

Attracting attention and drawing a big crowd in front of the store with their melodic sound, they were all fashionably dressed in glittery T-shirts and blue jeans.

Turns out they were actually a well-known singing group called Brothers for Life, in town for a 9/11 concert at Central Park. Their excellent harmony stopped traffic-and their good looks helped, too. You know New York City folks, they love a good show-especially if it's free. The group handed out several CDs to the crowd.

Allure, the magazine dedicated to beauty, announced its first-ever Allure Lounge Color by Maybelline New York at the Empire Hotel, a style-driven event held during New York Fashion Week in the storefront of the hotel. Fashion Week isn't complete without the hair and makeup looks that help articulate a designer's vision, and the Allure Lounge is a nice way for the women of New York to be a part of Fashion Week. They get complimentary runway-inspired makeovers and a sneak peak at the newest collections of emerging fashion designers.

Allure will also give photo shoots after the makeovers that can be instantly updated to social media profiles, sponsored by Colgate and Maybelline New York. Hair products and samples will be provided by Catwalk by Tigi, and hair styling will be done by the Ricardo Rojas Salon, featuring a debut of Rojas' new tango-inspired brush line.