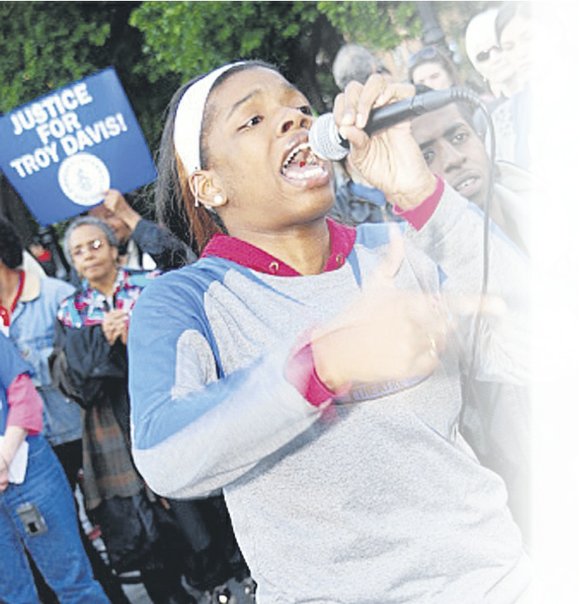 "Because of the blatant racism and bias in the U.S. court system, I remain on death row in spite of a compelling case of my innocence. The truth is I am innocent!" said Troy Davis.

Death penalty opponents have scheduled a public protest this Friday, Sept. 16 at 4:30 p.m. in the heart of Times Square at 42nd Street and Seventh Avenue. The rally is an earnest effort to preserve the life of Davis, who is scheduled to be murdered Sept. 21 at 7 p.m. Georgia state prison personnel announced the execution date, his fourth since 2007, on Sept. 7.

Davis, 41, an African-American male, has endured the grind of being on Georgia's death row since his conviction for the Aug. 19, 1989, killing of David MacPhail, a Caucasian cop in Savannah. Davis maintains his innocence and has been one of the key figures for anti-death penalty advocates around the world.

The U.S. Supreme Court recently refused to overturn a federal judge's decision that Davis had failed to clear his name after being given ample time to do so. This opened the door for the latest order of execution to be issued.

Despite allegations by Davis' defense team of "inconsistent evidence, police coercion and recanted eyewitness accounts," prosecutors have not pursued any other possible leads, even though eyewitness accounts and other evidence have suggested another man may be responsible for the crime.

Seven of the nine witnesses who originally testified against Davis have since either contradicted or recanted their testimonies in sworn affidavits. As a matter of fact, three of them claim their confessions were coerced by police. Even though new evidence that would exonerate Davis has been presented, prosecutors have refused to consider its introduction.

"Without the cover provided by the positive results of a gunpowder residue test, it is perfectly clear that racists are using the legal apparatus to kill who they choose. We have to double our efforts to save Troy, to save ourselves, to stop the murder!" expressed former political prisoner Tarik J. Haskins.

Davis' supporters are striving to make him the sixth Georgian to be exonerated from death row since 1977.

Former Davis trial juror Brenda Forrest stated in a recent interview, "They are liars!" She signed a sworn statement that read, "I have some serious doubts about the justness of Mr. Davis' death sentence. I find it very troubling that the jury's sentence was based upon incomplete and unreliable evidence. If I had been aware of this newly gathered evidence and had the benefit of it at trial, I would not have sentenced Mr. Davis to death." Three other jurors from the case followed suit.

Georgia journalist Patrick Rodgers added, "It really blew me away that [District Attorney Spencer] Lawton Jr. would not only acknowledge the fact that police coercion was a factor in the initial testimony, but he would justify it by saying, 'Oh well, they were probably coerced by the defense too, so that balances it out and we should still kill him [Troy].' I think there are some very serious questions that can be raised about the conduct of the prosecutors during his tenure."

Fellow death row prisoner of war Mumia Abu Jamal recently revealed, "Its [the trial's] elements-false testimonies, police pressure and prosecutorial blindness-aren't Georgia's problems, it's an American one. While all [recanted testimonies] are remarkable, none is more remarkable than the one of Antoine Williams, who said, 'After the officers talked to me, they gave me a statement and told me to sign it. I signed it. I did not read it because I cannot read. I felt pressured to point at him.' False testimony was sufficient to put him on Georgia's death row, but now the truth seems irrelevant."

Davis will have his final hearing in front of the Georgia Board of Pardons and Paroles on Sept. 19, two days before his pending execution date. Davis' advocates are urging the board to grant him clemency.