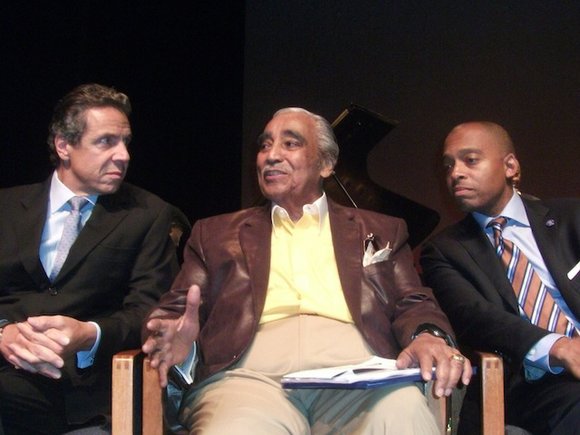 This past weekend, elected officials, community leaders and Harlem residents joined Assemblyman Keith L.T. Wright for the 10th annual African-American Day Parade Breakfast at the Schomburg Cultural Center in Harlem. Every year, before the parade begins, the African-American Day Parade Breakfast Committee (AADPBC) honors community leaders and those who make a positive impact in the community with a breakfast and award ceremony.

"The first African-American Day Parade Breakfast was developed to recognize the accomplishment of the Harlem Little League, making it to the 2002 Little League World Series," said Wright. "Now we do it every year and I am proud to be a part of this celebration."

"We believe in you. You have to succeed," said Rangel. "Not just for yourself, your family and your community, but it is going to be rough out there with technology. Never give up, never give in and never stop believing that you can do it."

Cuomo, Rangel, Wright and Schomburg Director Dr. Khalil Muhammad each spoke to the audience before the recipients received their awards.

"The Schomburg Center is committed to the celebration of Afro-American culture, not only in the past but also in the present," declared Muhammad. "This day is an opportunity to reconnect with the community. To remind the community that this is a community institution."

The governor congratulated the honorees. He also addressed some of the issues that have had an adverse effect in communities of color in New York City, such as gun violence, recidivism and unemployment.

The governor reminded everyone there that he wants to empower, not punish. That is one of the reasons he closed prisons. He wants to recycle state monies into community-based programs that will assist in training and jobs.

"It is not just about gun laws. We know that there are other things that we can do that will work," Cuomo continued.

"When young people feel the lack of opportunity, that's when the level of violence goes up. We know that there is a connection between violence and unemployment. Congressman Rangel has taught us that empowerment zones work. Community-based services work. Anti-violence programs work."

Gresham thanked the AADPBC for giving him an award. "I remember when my parents moved me up from the South. The first place we lived was Harlem," said Gresham. "It's an honor to be recognized as a leader of a great institution like 1199."