Harlem Mothers S.A.V.E. call on the youth for answers 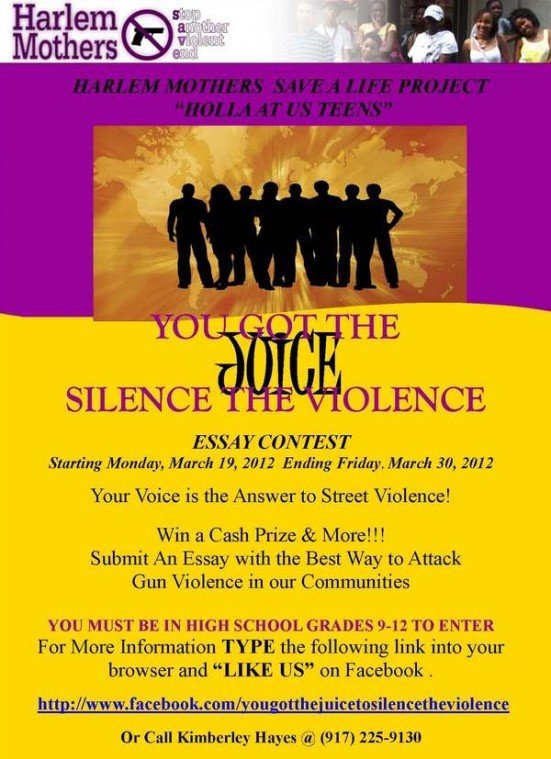 Harlem Mothers S.A.V.E. call on the youth for answers

Harlem Mothers SAVE (Stop Another Violent End), an anti-gun group, is calling all New York City high school students to participate in the You Got the Juice: Silence the Violence Essay Contest. Students are to submit essays that describe ways they think they can stop gun violence in their communities.

Jackie Rowe-Adams and Jean Corbett-Covington (formerly Corbett-Parker) founded Harlem Mothers S.A.V.E., the nonprofit organization in November 2006 after losing their sons to gun violence. The questions that constantly plagued them were: How do we stop this senseless violence? They were also concerned about where are these guns coming from and how they could stop the flow. They decided to turn their grief into a powerful instrument and help save other mothers children.

Harlem Mothers S.A.V.E. has been consistent in their message since the beginning. The mothers go into schools and talk to young people about gun violence prevention with their Save A Life project. The goal is to help students become advocates against gun violence.

Aside from the essay contest, there is an annual Day of Healing in Harlem with other organizations. At this event they try to attract as many young people as they can and together remember those they lost to gun violence and to bring awareness to other young people that they don't have to turn to violence to solve their problems or gain respect. At this year's Day of Healing event on April 25th the essay contest winner and their concept of will be presented.

Kimberly Hayes, a consultant who provides Harlem Mothers S.A.V.E. program design services and support stated that the organization has been asked by the District Attorneys' office to allow students to present their ideas to the District Attorney offices of the different boroughs but that even if they don't have funding to implement those concepts they had a chance to be voiced.

In January, the organization held a screening of the movie Juice on its 20th anniversary, at AMC Magic Johnson Theater in Harlem. Harlem Mothers joined with Khalil Kain, star of the film to show young people the senseless effects of gun and gang violence. Kain, who played Raheem Porter in the film held a Q&A session for teens to discuss the themes and messages in the film.

The film title Juice, refers to power, respect & authority. Harlem Mothers wants young people to know that they do not have to tote gun and gang bang to get respect from anyone. Hence the name of the essay contest is "you got the juice, silence the violence".

"The contest is to give them a voice and provide adults with solutions and ways to talk to other young people about violence," said Rowe-Adams. "We have big dreams because we believe all things are possible with God. This young person's model could become a citywide model and then eventually a nationwide model with the right funding and the right people."

The mothers hope the contest winner will test the effectiveness of their concepts by either taking polls in the neighborhood or perhaps holding a youth rally. Hayes hopes that young people to "pull out all the stops and give everything they have inside" to help address this issue.

Interested students can get more information about the contest and to submit essays visit the Harlem Mothers SAVE Facebook page at www.facebook.com/yougotthejuicetosilencetheviolence. Students can also call Kimberly Hayes at 917-225-2130 for more information. The deadline is Friday, April 13.