A conversation on 'The State of Black Theater' 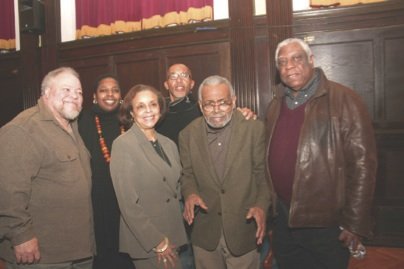 A conversation on 'The State of Black Theater'

Recently, a lively conversation on "The State of Black Theater" was held by four luminaries in Black theater at the Newark Public Library. Those luminaries were Newark native and world-renowned poet, playwright and activist Amiri Baraka; legendary theater producer Woodie King Jr.; acclaimed actor Stephen McKinley Henderson; and actress Marie Thomas. The event was moderated by Baraka Sele, a consultant and independent producer with the New Jersey Performing Arts Center in Newark.

For two hours on a warm Saturday afternoon, an overflowing audience of theater enthusiasts gathered and listened to profound discussions about Black theater and its past, present and future.

Despite cutbacks in funding and the closure of several libraries in Newark, West has been able to organize important Afrocentric cultural programs at the Newark Public Library throughout February and March, exploring this history of theater in Newark from the perspective of theater producers, actors and playwrights who struggled for many years to develop meaningful, positive theater throughout the city. Among those featured were Marvin Jefferson, Ensemble Theatre Company; Clarence Ali, Theater of Universal Images; Kevin Maynor, Trilogy: An Opera Company; Richard Wesley, an acclaimed playwright and screenwriter; and many others.

Despite the presence of a variety of Black faces in movies and television in various roles, the question was asked: "Where are the plays of our great heroes portrayed in Black theater, such as Paul Robeson, W.E.B. Du Bois, Harriet Tubman, etc.? Where are our positive role models on television or in the movies?"

"That's why Black theater is still so vital, because it is futile to consider waiting for Hollywood to create and produce the greatness of ourselves," Baraka commented. "We know that Tyler Perry has made millions of dollars playing Madea onstage and in the movies, but where is the alternative to him, playing someone's mama?"

Baraka continued, "It's Black theater that has always been the greatest training ground for all of the great Black actors that we see today in Hollywood; if you are talking about Sidney Poitier, Ruby Dee, Cicely Tyson. Denzel Washington, Morgan Freeman and many others, they all got their start in Black theater.

"We first saw Denzel onstage playing Malcolm X at the New Federal Theatre in New York in the play 'When the Chickens Come Home to Roost.' Today, Denzel is on the A list of movie superstars--his movies have grossed billions of dollars in revenue--thanks to Black theater," he said.

All of the speakers agreed about the vital need to educate Blacks on the importance of producing our own theater and using our own resources, including the new technologies of social media and the Internet, to market ourselves. However, the struggle to produce great Black theater continues.