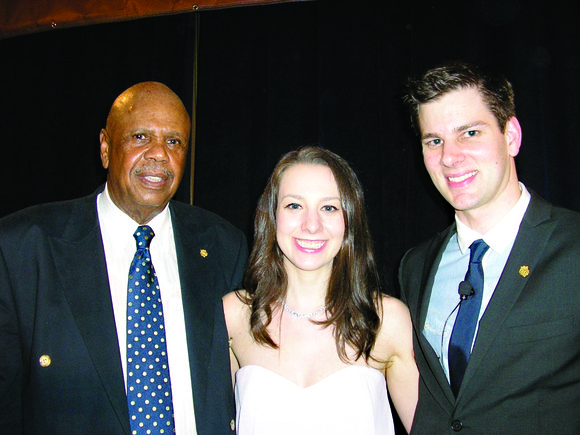 "Sport is one of the great leadership laboratories we have," said Andrew Rodriguez, winner of the 82nd annual AAU Sullivan Award, which is presented to the nation's top amateur athlete. "You look at it as a team, just like any sort of organization. People have roles, people have to embrace those roles and you all have to work together."

Rodriguez, a mechanical engineering major with a 4.14 GPA, has been a standout on the football field and in the classroom. He is Army's first Campbell Trophy winner and West Point's 14th National Football Foundation National Scholar-Athlete. Past Sullivan Award recipients from the sport of football include Peyton Manning and Tim Tebow. Following graduation in May, Rodriguez will be posted in Vicenza, Italy.

"My goal is to go to the Olympics in 2016," said Jupiter, the first player in USC history to receive AVCA National Player of the Year honors. "It's the goal of every great athlete. I really feel I'm in the right crowd. I really feel honored to be selected."

"I compete for the NYAC, so this is kind of like my second home," said Camarena-Williams. She is one of two U.S. women currently ranked in the top five in the world in shot put. "We're starting to make a statement for the women's throws."

For Wieber, the reigning all-around world champion, being a finalist provided a jolt of confidence as she prepares for this summer's London Olympics.

As injury puts Reutter's sports future in doubt, it was affirming to be acknowledged for her best-ever season in 2011.

"This award represents integrity, passion, being true to your ideals and being a positive role model," said figure skater Sarah Hughes, winner of the 73rd Sullivan Award.

"It was a great night for young athletes," said Cedric Jones, athletic director of the NYAC. "I look forward to seeing what these people do in the future."