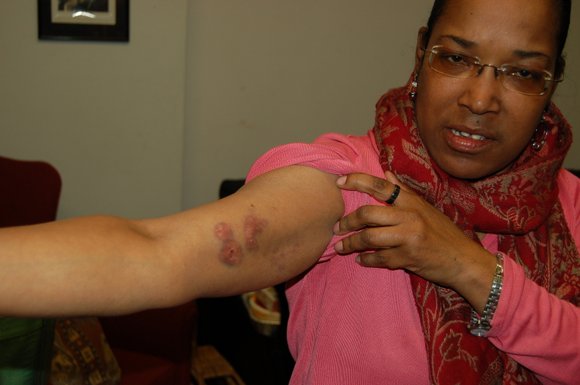 It was after midnight on Saturday, and jazz aficionados were enjoying a night of soulful renditions at Bed-Stuy's popular Sista's Place on Nostrand Avenue when a fracas across the street caught their attention.

It was a traffic stop--ultra commonplace in inner-city neighborhoods.

Three young Black males were told to exit their vehicle. They complied. A witness said passersby looked on as cops tossed the car. When the police came up empty-handed, they told the young men to be on their way.

At that point, December 12th Movement co-founder Viola Plummer, one of those who had come out of the jazz venue to see what was going on.

Plummer, a seasoned activist and chief of staff for Assemblywoman Inez Barron, said the cops told her to leave the scene. She replied that since they had gotten back into their patrol car and the young men were told to go on, she thought that they were done.

Things escalated when other observers intimated similar sentiments. Some took pictures. Told that they were now obstructing government administration, five members of the December 12th Movement were arrested.

And one Vernon Derdere was kept overnight, charged with resisting arrest.

"When the officer got out of his car, he called for backup," said Ajamu. "We were told that we were going to be arrested. They used excessive force--this was a false arrest."

"The police are out of control. What was their motive for stopping these young Black men in their vehicle and gong through their car?" asked Brooklyn City Councilman Charles Barron.

"We are getting stopped and frisked whether we walk or drive, and then they are going to arrest us if we watch them doing it?" Barron said. "It is almost as if they are deliberately provoking us. Police Commissioner Ray Kelly should be fired for the dangerous atmosphere he has created and the consequences of the actions of his reckless cops."

A July 2 court date has been set, but Roger Wareham, the attorney for the five, told the AmNews, "I am completely confident that if the police department is foolish enough to go to trial on this, my clients will be vindicated and they will have set the basis to be sued for false arrest and malicious prosecution."

Calling from the NYPD press office on Wednesday afternoon, Inspector Kim Royster told the AmNews that around 1:30 a.m. on April 1, officers from the 79th Precinct "observed a vehicle with a defective headlight. As they reached the vehicle, they noticed a very strong smell of marijuana."

At that point, Royster said, the officers asked the occupants of the car to exit it

"Forty or 50 members of the community came out and started yelling and protesting; they surrounded the officers' van and refused to move out of the street. Apparently, the crowd disapproved of the vehicle being stopped."

The crowd started taunting the Black and Latino officers, the inspector said, adding that the police told the "overwhelm[ing]" crowd to disburse several times, but they refused, prompting the cops to call for assistance.

"No pepper spray was used, no batons were used," there was no excessive force, she said.

Royster confirmed that five people were taken to the precinct; four individuals were given summonses for disorderly conduct and one person was charged with obstructing governmental administration and resisting arrest.

Because "[the police officers'] attention was diverted," the young men in the traffic stop were told to go on their way sans ticket.