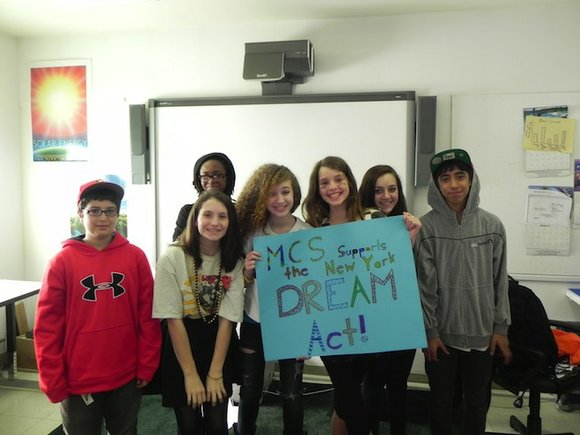 The DREAM Act would allow tuition equality for education for any student no matter their citizen status. It would also help authorize conditional permanent residency for illegal immigrant students who have graduated from high school and lived in the United States for at least five years. This permanent residency would then allow these students to pursue a college degree at affordable tuition rates.

"Getting our students to protest for such a bill is important to the MCS, because we want them to get educated in the issues of their community and to know that, as citizens, their voices matter in any political decision," said MCS teacher Kristen Lee Berger.

Each year, MCS has seventh and eighth grade students, in order to understand the meaning of citizenship, become engaged in a project that is connected to their social studies curriculum. In past years, students traveled to Mississippi to show support for the victims of Hurricane Katrina and helped renovate buildings for children with terminal illnesses.

"Activism means fighting for your beliefs and against social injustice throughout the world. Through our Activism Project, we apply what Manhattan Country School has taught us about standing up for civil rights and environmental justice," said MCS eighth grader Kyle Ragland in a press release.

This year, the school wanted to get them focused on the aims of the DREAM Act. "Working in collaboration with the American Immigration Lawyers Association, the students learned how to lobby and about the difficulties of getting a legislative bill to pass," said Lee Berger.

"They talked to lawyers and congressmen about immigration. Children also had to deal

with people who were against the DREAM Act, but basically they were very excited about trying to change other people's minds," she added.

"It is up to our generation to change this and to fight against what is wrong," said one of the students fighting for the DREAM Act.

According to a CUNY report, of the 4,500 undocumented students who graduate from high school in New York City every year, only 5 percent will finish college because of finances.

While students and elected officials don't want to miss an opportunity to push for this legislation to pass, many are also against the act, and no decision about the legislation has been made.