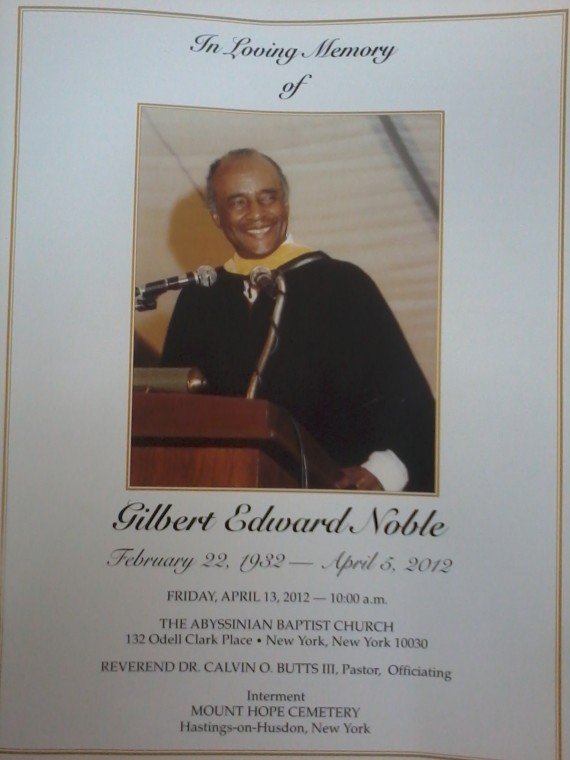 Hundreds of mourners filled the Abyssinian Baptist Church in Harlem on Friday morning for the funeral service of the late Gil Noble. Known best as one of New York City's first Black television personalities and host of the long-running Black public affairs program, "Like it Is," Noble passed away last Thursday at age 80.

The Rev. Dr. Calvin Butts, senior pastor of the Abyssinian Baptist Church, eulogized Noble and services were open to the public as mourners packed the church almost to capacity.

The closed casket service brought out the who's who of notable Black New Yorkers and national figures who shared memories and tributes to Noble. Among those who spoke were Louis Farrahkahn, actor Danny Glover, Susan Taylor and Mayor David Dinkins.

"We lost one of the heroes of the community," Dinkins said. "I am here as part of his extended family. He spoke truth to power. Gil carried the journalistic torch. Gil fought racial discrimination here and apartheid in South Africa. It was a life well lived. Gil Noble left us paid in full let the rest of us not be in the rears."

Farrakhan said, "He taught us the meaning of life. Gil Nobles' mark was his unequaled mark on history. His character prevailed (and) he never sold out. He was a brother of enormous integrity. When you can achieve without compromising who you are, that is Gil Noble. He gave for a cause bigger than ourselves. I know Gil was a soul that was sent to us by a higher power to do things."

A lover of jazz music, Noble's passion was showcased through tribute performances including the playing of his favorite song "Misty." Musicians Randy Weston, Alex Blake and Leon Dorsey performed the jazz selections.

Noble was buried at Mount Hope Cemetery in Hastings-on-Hudon, NY. He is survived by his wife of 52 years, Norma Jean Noble, son Chris, his daughters Lynn, Lisa, Leslie and Jennifer and eight grandchildren.

In lieu of flowers the family is asking that contributions be made to The Gil Noble Archives. Donations can be sent to P.O. Box 431138, Upper Montclair, N.J. 07043 or online at www.gilnoblearchives.com.