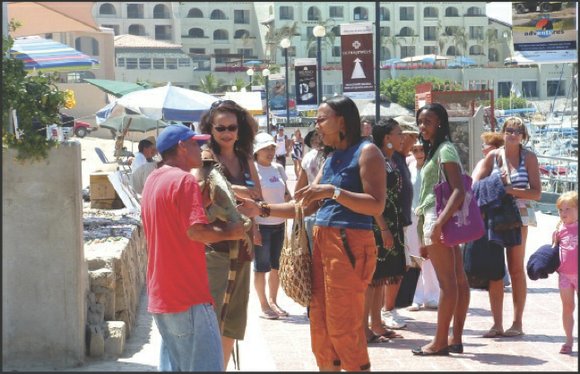 Yep, Black Meetings & Tourism magazine (BM&T), in collaboration with Travel Professionals of Color (TPOC), has proclaimed 2012 the "Year of African-American Heritage Tourism." And it's not surprising, given that in recent years African-Americans have been one of the fastest growing segments of the travel and tourism industry.

What I love about this announcement even more is that, according to BM&T, the TPOC and other Afrocentric-focused travel entities, it's not just about our interest in heritage travel, rather that numerous destinations, organizations and others are making significant and heartfelt efforts to highlight heritage and cultural travel that appeals to a wide variety of ethnicities and cultures.

In BM&T's press release, Gloria M. Herbert, the magazine's associate publisher and editor, is quoted as saying, "This growing interest in our heritage as a people is nothing new...But with recent developments, such as TPOC's Heritage Tourism Certification Program, the ongoing popularity of the annual African Diaspora Heritage Trail Conference and efforts by destinations like Miami, St. Martin, Philadelphia, Birmingham, the Dominican Republic and Columbia, S.C., to establish and/or further develop or promote heritage trails, the time could not be more appropriate for us to proclaim 2012 the 'Year of African-American Heritage Tourism.'"

Among the other destinations they note are Toronto and Windsor, Canada; Ghana and South Africa; the U.S. Virgin Islands; Trinidad and Tobago; Barbados; Buffalo, N.Y.; and Detroit, Mich.

In addition to destinations focused on heritage tourism, there are a bevy of others that are high on the radar this year.

Among them is Fodor's, one of the world's premier travel resources. Fodor's has put out a guide to the 21 best places to go in 2012, dividing them by "Buzzy Destinations," "Emerging Hotspots," "Great Value" and "Noteworthy Events."

Among those "buzzing" this year are Scrub Island, the first resort development in the British Virgin Islands in over 15 years; Cusco, high in the Peruvian Andes; and Charleston, S.C., for what they call its "foodie-centric" ambiance. Budapest and Portugal are among their "Great Values," and they name South Korea, Panama and Cuba as 2012 hot spots.

Lonely Planet, which for the past 30 years has created and published some of the most respected travel guides for those desiring to explore the globe, also has a "Top Destinations" list for the United States (note: they have a variety of Top 10 lists, including those for beachside cities, trekking, attractions in certain cities, etc.) this year with 10 places: Culebra, Puerto Rico, the U.S. Virgin Islands, Chicago, Boulder, Cincinnati, the Big Island in Hawaii, New York's Hudson River Valley, California Gold Country, the Four Corners Region in the Southwest and Yellowstone National Park.

So what's the scoop? Cincinnati, they say, "gets bypassed by many road trippers, but it's quietly transformed itself in the last decade into a worthy weekend getaway. Life centers around the river--much of which can be seen by foot: river walkways are best on the Kentucky side... Narrow, twisting (and steep) brick roads of the Mt. Adams district lead past 19th-century Victorian townhouses... Best, though, is the National Underground Railroad Freedom Center, open since 2004, on the banks of the river where many slaves escaped to freedom in the 19th century."