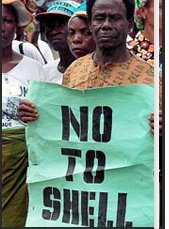 Apr. 24 (GIN) - An independent assessment by Amnesty International has found that a damaging oil spill in Nigeria's Niger Delta was much worse than the oil company Shell admitted.

The spill in 2008 was caused by a fault in a Shell pipeline. It resulted in tens of thousands of barrels of oil polluting the land and creek surrounding Bodo, a town of some 69,000 people.

The assessment found that between 1,440 and 4,320 barrels of oil flooded the Bodo area each day following the leak. The Nigerian regulators have confirmed that the spill lasted for 72 days.

Shell's official investigation report claims only 1,640 barrels of oil were spilt in total. But based on the independent assessment the total amount of oil spilt over the 72 day period is between 103,000 barrels and 311,000 barrels.

"The difference is staggering... the volume of oil spilt at Bodo was more than 60 times the volume Shell has repeatedly claimed leaked," said Audrey Gaughran, Amnesty's Director of Global Issues.

Meanwhile, a group of Nigerians in the U.S. called on President Goodluck Jonathan to implement recommendations from a U.N. environmental report on the Ogoniland, in the Niger Delta region. The report, released last August, said 50 years of crude oil spills have damaged the region's water supply and agricultural land.

Anslem John-Miller, member of the Council of Ogoni Professionals, said: "We really find very appalling that a president who happens to come from the Niger Delta ...will keep silent and pay a nonchalant attitude towards that kind of monumental report."

Miller said there should be no further oil exploration in Ogoniland until the pollution is cleaned up.