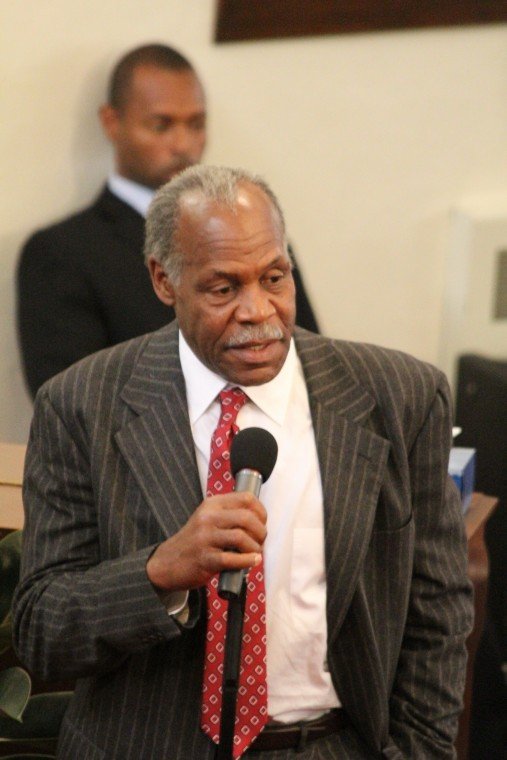 "If we continue to do the work and demand justice--I think that everything is in place for Mumia to come home," actor-activist Danny Glover told the Amsterdam News.

Like good old-fashioned activism from the days of yore, this past Tuesday, April 24, a broad coalition of community organizers, activists, artists, students, scholars, celebrities and concerned individuals held a national rally and protest at the headquarters of the U.S. Department of Justice (DOJ) in Washington, D.C.

The protest was held on the 58th birthday of political prisoner Mumia Abu-Jamal to call for his release. Renowned activists, including hip-hop artist M-1 of the duo Dead Prez, participated in acts of civil disobedience at the protest.

Organizers hoped that their actions would dramatize their formal request that U.S. Attorney General Eric Holder "meet with a delegation to discuss systemic police corruption and civil rights violations in Abu-Jamal's case and in the cases of hundreds of others across the nation."

Asked if he thought that Holder and the DOJ in general were hearing the calls to free Abu-Jamal, Glover replied, "What they are listening to, and what they hear profoundly, is the fact that people are still questioning what is happening and what has happened. Certainly, the basis of bringing Mumia home is not based on the rallies. It is based on the fact that the information has prevailed and is going to allow people to challenge what is going on."

Glover praised the fortitude of the anti-death penalty proponents who have fought for years on cases such Abu-Jamal's. "The fact that we have come this far gives us the opportunity to go even further with this case."

A former Black Panther and a prolific writer and much-sought-after political commentator, Abu-Jamal was framed for a murder he did not commit, according to a world of supporters. Millions have demanded his release, including international governments and heads of state from France to South Africa, from President Nelson Mandela to Archbishop Desmond Tutu and members of Congress, the European Parliament, the NAACP, labor unions and Amnesty International.

On Dec. 9, 1981, in Philadelphia, journalist Abu-Jamal was arrested for the killing of a Philadelphia police officer, Daniel Faulkner. In 1982, he was convicted and sentenced to death row. Last year, the Supreme Court let stand the decisions of four federal judges whose unanimous rulings stated that Abu-Jamal's 1982 death sentence was unconstitutional. In early December, the Philadelphia district attorney's office decided that it would no longer pursue a death sentence in this case and his original sentence was commuted to life in prison without parole.

Supporters of Abu-Jamal have cited a mountain of evidence as the need for his immediate release or at least a new hearing. Arnold Beverley came forward and said that it was he--not Abu-Jamal--who shot Faulkner at the behest of a certain police officer. For years, witnesses have come forward and recanted testimony that they say was coerced by members of the Philadelphia Police Department.

Glover notes that the cops involved in the violent arrest and shooting of Abu-Jamal in 1981 were already under the spotlight as part of a DOJ investigation of the Philadelphia Police Department. Mere days after Abu-Jamal's conviction, 15 of the 35 police officers involved in collecting evidence in his case were be convicted and jailed, including Alfonzo Giordano, the police inspector in charge of the crime scene investigation.

All this notwithstanding, Abu-Jamal remains behind bars.

Glover stated, "The fact that the death penalty was removed from over Mumia's head...is huge. An attempt by the state to kill someone, to murder someone, and to have failed to do so, essentially brings to the public attention the case of Mumia. We have to understand that there's another space that is open now to uncover the real killer of officer Faulkner."

An informed optimist, Glover is clear about why Abu-Jamal sparks the consciousness of activists worldwide. "Well, aside from the obvious injustice, Mumia is a journalist and he continues to write. He is published. People continue to read his words and hear his voice constantly. Journalists around the world...have been murdered, framed, incarcerated, etc....to keep them quiet. The fact that some people wanted to keep him quiet is something we can't underestimate," Glover told the AmNews. "People were aware of what he said, as well as what he wrote, and that has enormous ramifications on understanding exactly what this case is about."

Glover is an internationally known superstar. He could be sitting on a beach somewhere chilling. Instead, he is out in front of some of the most controversial issues.

"Some people try to figure out my involvement. The fact is that I have a history of fighting for justice wherever I feel there is injustice. It is what people often respond to. I often reflect on work that I do and what issues I take on. I think it is much larger than just me being a celebrity, I've always put myself in a situation where I try to demystify what people often think of the causes [I deal with].

Perhaps surprising to some, given his degree of staunch involvement, Glover has not actually spoken with Abu-Jamal. "I haven't seen him at all. I haven't written to him or talked to him at all. I don't feel that it's necessary in order to express my feelings about this case as a citizen. I will see him, I'm pretty sure, when he comes home. I don't need to see someone in order to validate my engagement in their struggle, but that doesn't diminish the sincerity of those who go to see him or go to talk to him or bring back messages from him."

Long known to be a supporter of the "Cuban Five," Glover noted, "I go see Geraldo Hernandez, one of the Cuban Five, typically because that case is so isolated. And I know that if we take some pictures, that picture would not only find its way to becoming part of his own personal album, but to all the people who support him around the world and Cuba itself--that is a different situation.

"I am an optimist. I try to be a pragmatist as well. We've had a major victory [when Abu-Jamal was taken off death row], and I think that if we continue to do the work and demand that he comes home, he will. He has the support of some extraordinary people around the world, like Archbishop Desmond Tutu."

In the interim, folk are preparing to hear from Abu-Jamal again at a conference in Manhattan. Free and open to the public, the four-day groundbreaking event is being organized by the Institute for Research in African American Studies at Columbia University (IRAAS) from Thursday, April 26 to Sunday, April 29. Titled "A New Vision for Black Freedom," the conference will feature over 100 panelists, speakers and performers who will honor the legacy of Manning Marable, the eminent, radical Black scholar who founded IRAAS in 1993 and passed away a year ago this month. Delivering the keynote address will be Angela Davis and Abu-Jamal via teleconference.

Activities for the conference will take place at the Schomburg Center, the Riverside Church, the Cathedral of St. John the Divine and Columbia University.