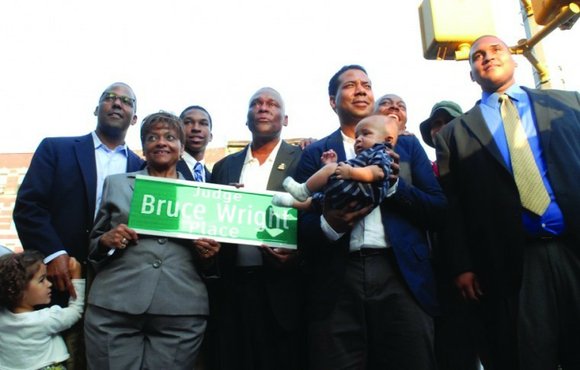 A new name sits at the intersection of West 138th Street and Adam Clayton Powell Boulevard. The street now bears the name "Judge Bruce Wright Place," after the famed judge and father of Assemblyman Keith Wright.

Keith Wright fittingly presided over the ceremony for the street renaming. Bruce Wright's mother, along with his sons and brothers, was also at the ceremony.

"We wanted to let people know that there was a legacy," Keith Wright said. "The Wright family has shared our father with the public. We've shared all of our triumphs and the tragedies. It's been an honor to do so. We wanted to make sure that everyone knew that our father was the greatest father you could ever have."

Wright said that if his father were alive today, he would be outraged at various issues going on in the city, most notably the NYPD practice of stop-and-frisk. Mainstream media gave the judge and scholar the nickname "Cut 'Em Loose Bruce" because of his tactic of allowing offenders to go free, giving them a second chance.

Several judges from across the area were also on hand at the event, including Cathy Davidson, George Daniels and Ken Thompson. Several elected officials, family members and those close to Bruce Wright told stories about their experience with him. A letter from Gov. Andrew Cuomo was also read.

The 138th Street and Adam Clayton Powell Boulevard intersection was picked for renaming because Wright resided in an apartment on the street. Keith Wright also spent a portion of his childhood there.