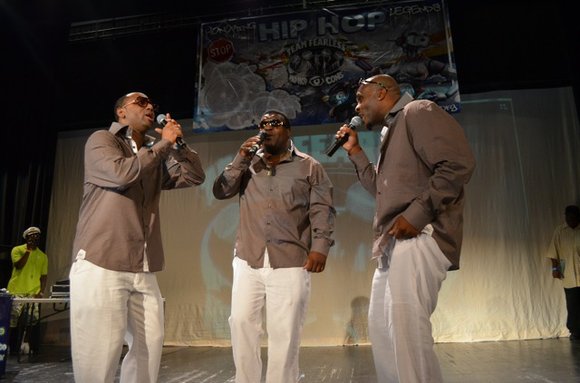 To the rhythm, to the boogie, to the beat! It was a page from hip-hop's golden era as some of hip-hop's pioneers were honored at the Team Fearless Hip Hop Legends Honors ceremony at Baruch College on a recent weekend. The event came equipped with rappers, break dancers, graffiti artists, DJs and a crowd that represented three generations of rap fans.

The honorees stepped out of limousines onto the red carpet, where they were greeted by an onslaught of flashing lights from cameras and applause as they entered the building. Event coordinator and hip-hop legend the Devastating Tito said he wanted to resurrect old-school artists by exposing them to a new generation of fans.

"I saw that as rap grew in popularity, those whose hard work built the pillars of its success fell by the wayside," Tito said. "I wanted to create a forum to expose these innovators to a new fan base."

Tito is a member of the Fearless Four from Harlem, who are best known for their 1982 single "Rockin' It." The six-member group consisted of Tito, the Great Peso, Mighty Mike C, Krazy Eddie, DLB and Master OC.

"I came out of an era where maybe five or six groups from Harlem and the Bronx founded hip-hop. I think acknowledgement is basically everything," Tito noted. "The Fearless Four was one of the lucky groups. Our music traveled through the tristate area and neighboring states by record sales from the trunks of cars. There weren't any marketing or promotional budgets back then."

In between the presentations, there were live performances by honorees Chief Rocker Busy Bee, the Crash Crew and T La Rock. T La Rock, brother of Special K of the Treacherous Three, said he was glad that some of the pioneers were being acknowledged.

"Not too many people know that I was Def Jam's first artist," he declared. "It's good to be a part of hip-hop's history."

Women were also honored at the event. DJ Lady Love and Queen Lisa Lee received awards, along with arguably one of the dopest females to ever touch the microphone, MC Sha Rock. Formed in 1976, the Funky Four Plus One was the first hip-hop group to have a female member. The original members were K.K. Rockwell, Keith Keith, Sha Rock and Rahiem, who later left the group to join Grandmaster Flash and the Furious Five.

When MC Sha Rock received her award, she remained humble despite the fact, as she reminded the crowd, that she had been the first female MC to appear on national television. MC Sha Rock said she was proud to be a piece of a culture that is revered around the world.

"There are so many different elements in the culture today," she said. "Today, people only celebrate one aspect of hip-hop and that's rap. Critics hold rap under a microscope and talk about what's right or wrong with the music, but you have to understand that rap and its influences are more than just music."

She added, "It's a culture that is recognized globally. Fortunately, you don't have to like any one artist; rap is so enormous, you have a large variety of styles to appreciate. That's the beauty of it."