Keeping the peace: NYC takes a stand against violence 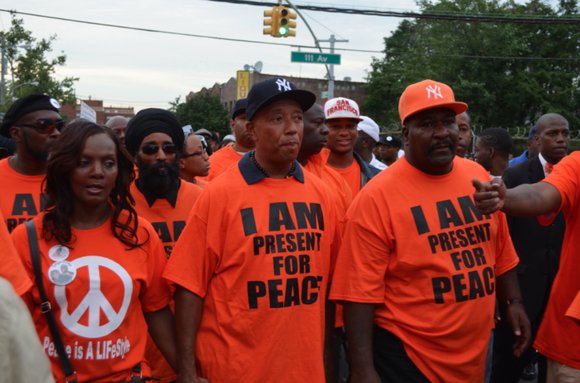 Keeping the peace: NYC takes a stand against violence

Last weekend, community leaders gathered for the "I Am Present For Peace" march to answer the call for an end to the senseless violence in Jamaica, Queens. Activists and concerned citizens assembled at the corner of Sutphin Boulevard and 111th Avenue and marched down Sutphin to the Baisley Park Houses to show strong, real-life support.

New York City is currently experiencing one of its most violence-plagued summers on record.

Capt. Dennis Mohammed of the Peacekeepers, one of the organizers of the march, called on parents, police and local officials to work together to implement strategies in an effort to end the violence. The Peacekeepers work to combat gun violence in 19 inner cities across the country.

"We are part of a long chain of organizations across America. The reason I am here is because four weeks ago, the Minister Louis Farrakhan hit the streets of Chicago with the Fruit of Islam and gave orders to Black men around the country to go into the streets in an attempt to stop gun violence," Capt. Dennis said. "These men go out onto the street corners for one hour a week in every community to be present for peace. We are here to recruit more men and to take a more active role against gun violence in Queens."

Hip-hop mogul, humanitarian and Queens native Russell Simmons came out to support the march. "I am a supporter of the Peacekeepers. I am here present for peace. My prayers are with this community, because this is my community. This is my family," Simmons declared.

Simmons said that the march gives hope to the people in the community, and when the young people see that people care, it matters to them.

"There will always be struggle and suffering, but the work we do here today is a prayer. When the community sees what we are doing here today, it is inspiring. We have to mentor and provide hope for our youth," he continued. "A lot of young people don't have father figures. A lot of us could be their father figures. So, we are here to show them that we love our community. It's a simple prayer being here and the effort is a greater prayer."

Council Member Ruben Wills, District 28, Queens, also participated in the march. He said this march is a great first step in the intention to "Occupy the Corners."

"Now that community activists, clergy and political figures are together, we need to see how we can occupy the minds and hearts of our young people. They have too much idle time, because they have a lack of resources," Wills said.

Wills called the violence in our streets a public health crisis. State and federal lawmakers need to address this situation as such. "It is up to me to continue the work that I have been doing along with my colleagues to make sure we lock down our districts and to pour resources into initiatives that protect our communities from gun violence," he said.

Organizers say they will launch similar campaigns in the near future and stand in solidarity with the National Action Network (NAN) and the Rev. Al Sharpton. They will stand on corners in "hotspot" areas throughout the city, watching for any signs of violence, talking to residents in an effort take back the streets.