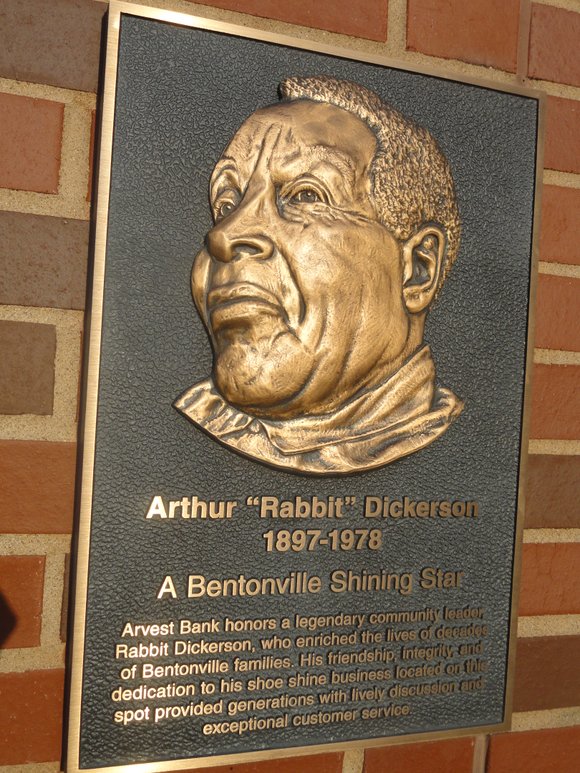 African-American Arthur "Rabbit" Dickerson owned and operated his own shoeshine business in Bentonville. (Arthur Dickerson.jpg)In the first part of this travel series, we had just dipped our toe into the city of Bentonville, Ark., situated in Northwest Arkansas approximately 110 miles from Tulsa, Okla., 216 miles from Little Rock, Ark., and 235 miles from Kansas City, Mo.

The impetus was to explore the new Crystal Bridges Museum of American Art, an architectural and artistic masterpiece that has already joined the echelons of the most significant museums in the world. Although this new "Cinderella attraction" is what is drawing people who may never have heard of Bentonville here, once you arrive, you realize that there is a fascinating history that makes it one of the most unique cities in the country.

I was fortunate enough to sit down with historian Monte Harris, a fifth generation denizen who is also the author of "Images of America: Bentonville." She gave me a brief overview of the city's history, starting with its establishment as a settlement in 1836, the same year that Arkansas achieved statehood. I think this snippet from the book sums up its early roots best:

"From the beginning, Bentonville was the center of county government, attracting an ever-increasing population of prosperous-minded merchants, attorneys, real estate speculators and their families. They served as town and county officials and built Bentonville's first homes, offices, commercial establishments, churches and schools. After suffering through the Civil War, several experienced merchants rebuilt, and once again, the businesses of the Bentonville Square flourished."

Among those early citizens was African-American Arthur "Rabbit" Dickerson, who was born here in 1897, who earned his nickname from the speed in which he did his chores as a kid. Dickerson went on to own and operate his own shoeshine business, was highly respected for his worth ethic--he worked until age 81--and was known and loved around town. Sometime after his death in 1978, the city honored him with a plaque mounted outside of the building of his last business location on Main Street near the town square, and every year there is an award given in his name.

According to Harris, that early entrepreneurial spirit of Dickerson and so many others of the day has been the lifeblood of the city ever since, helping it to not only survive but thrive, including through the Civil War and both World Wars.

And then came Walmart, which changed everything.

Family, country and love of others

The story of Walmart is really that of a family inextricably woven into the fabric of the culture here. To grasp how this all fits together, be sure to visit the Walmart Visitor Center, situated befittingly inside Walton's 5&10, the first business opened by Sam Walton in 1950, the same year he and his family moved here.

From the outside and just inside of the doors, it looks somewhat like it did back in the day--a quaint, classic five and dime offering a handful of retro souvenir items, a cafe selling beverages, candy and snacks and a large photo mural of the town's beloved "Sam."

However, just beyond the counter is an expansive museum possessing a wealth of interactive displays and numerous historical memorabilia collections that chronicle the company--whose global headquarters is located here in town--and the people who live and have breathed it since its founding.

A good start here is the Sam Walton Theatre for a short film detailing Walton's life, loves, work and philanthropy, which really provides a much more in-depth, behind-the-scenes look into this global phenomenon that, sadly, is often portrayed in a negative light in the media.

The multi-room gallery exhibits here are engaging and interactive, including artifact pull-out drawers--made with handles from old Walmart shopping carts!--timelines, newspaper and magazine features, Walmart products past and present, family history, the start of the Sam's Club stores, their worldwide philanthropic efforts and more.

Two of the most popular exhibits are Walton's office, depicted as it was when he died in 1992, and his beloved red 1979 Ford F-150 truck, which he drove every day until his passing. The underlying theme of the center is the great emphasis placed on the people, not just Walton and his family, behind Walmart's success.

And that is really the story of Bentonville, a town that, through perseverance, hard work and a billion-dollar enterprise, made a name for itself but remained humble and down-to-earth. This was evident in not only the way Walton and his family lived, but the residents as well. In fact, today, Northwest Arkansas has the highest number of millionaires--an estimated 10,000 of them--per capita in the United States, yet, flashy cars, clothing and homes--some of these millionaires still live in the same homes they bought back in the 1960s and 1970s--are the exception, not the norm.

This underlying appreciation of what's important in life--the people--is one of the most charming aspects of living or visiting Bentonville.

A little slice of Americana

Bentonville's quaint downtown square still has the look and feel of a slice of small town America. Here, you will find a bevy of restaurants, boutique shops, a market, bike shop, coffee houses, the Convention and Visitors Bureau and Chamber offices, galleries and the like all centered around a beautiful park blooming most of the year with multihued flowers, lush plants, inviting benches and open green space.

Numerous historic and family attractions can be found within a few miles of the square, such as Compton Gardens and Conference Center, named after Dr. Neil Compton, a noted Bentonville physician, writer, photographer and founder of the Ozark Society. The Conference Center is his remodeled home and the 6.5-acre garden features beautiful native and woodland plants, flowers and trees.

The Peel Mansion Museum and Historic Gardens, built in 1875 in the Italianate villa style by Colonel Samuel West Peel, is highlighted by authentic antiquities and artifacts of the era. The Museum of Native American History depicts the changing lives of America's first inhabitants through six different time periods, and some of the artifacts here date back some 14,000 years. These are just a few of the many historic and interesting sites and attractions in and around Bentonville.

Next up: where to sip, chew and savor a taste of the city!