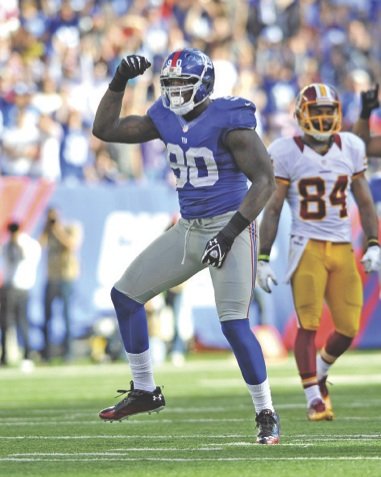 The Giants slew a mighty mental dragon by defeating the Green Bay Packers 38-10 on Sunday night at MetLife Stadium. It was a win that not only repaired their psyche, but also averted what would have been a disastrous three-game losing streak, with the NFC East very much in the balance with five games remaining. The 7-4 Giants, who will face the astounding rookie quarterback Robert Griffin III and the rising Washington Redskins on the road Monday night in an immensely important division pairing, righted, at least for the moment, a season that was steadily in decline.

"It was a huge win ... facing a team like Green Bay," said Giants wide receiver Victor Cruz. "We understood this was a game we needed to win. ... We played with passion and integrity, and it really came out tonight."

The 5-6 Redskins are on the upswing, and Griffin, also known as "RGIII," is already one of the most dynamic forces in football. The Giants' front seven must harass the 22-year-old phenom in the same manner they hounded Aaron Rodgers.

"He's one of the top five quarterbacks," Giants defensive end Justin Tuck said referring to Rodgers. "If you ask some guys, he's probably the top quarterback ... but we've had a lot of success against him. We sacked him I think five or six times, but he was running all night."

In fact, the Giants sacked Rodgers five times. While Rodgers is arguably the best quarterback in the NFL and makes plays with both his arms and legs, he does not pose a dual threat on the level of Griffin. The second overall pick in last April's draft out of Baylor, Griffin is a former world-class hurdler and one of the fastest players in the league--an anomaly for a quarterback. While he can wreak havoc on defenses with his legs alone, he is an adept passer with 16 touchdowns and only four interceptions--virtually unheard of for a first-year player. Perhaps most impressively, Griffin is completing 67.5 percent of his passes.

The Giants were inspired on both sides of the ball in their victory over the Packers. They will need to be equally outstanding to beat the Redskins.