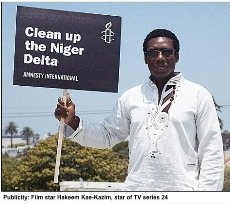 Dec. 11 (GIN) - In a piece carried by the Al Jazeera news service, Nigerian-born Hollywood film star Hakeem Kae Kazim joined the rising chorus of voices condemning the Royal Dutch Shell multinational oil company for refusing to clean up the devastation it created in the once picturesque wetland of the Niger Delta.

Kae Kazim's piece follows publication of a study that spells out a new legal climate which could hold investors liable as well as corporations for environmental harm by the corporations.

Commenting on the study by the University of Essex, Amnesty International wrote: "The net is closing in. International litigation is growing, with compensation cases now in progress in the Netherlands, the USA and in the UK."

"The shareholders of Royal Dutch Shell could be waking up to a multi-billion dollar headache this morning," Kae-Kazim wrote.

Sheldon Leader, director of the Essex Business and Human Rights Project which published the report said: "Shell claims that local sabotage caused pollution in the Niger Delta. Evidence suggests that although sabotage is sometimes to blame, so is badly-maintained equipment. And, regardless of how leaks are caused, when the oil starts spilling, Shell, as operator, has an obligation to move in swiftly and clean it up.

"This should cause shareholders great concern... Legal principles are changing and they leave Shell's parent company, Royal Dutch Shell, and other members of the Shell Group vulnerable. Large scale lawsuits could increase and more could be brought before courts in the EU and US for damage done in places such as the Niger Delta."

A suit by four Nigerian farmers again Shell is currently before a civil court in The Hague. If their case is successful it could pave the way for thousands of other compensation claims.