Angela Davis and Harry Belafonte: Where do we go from here? 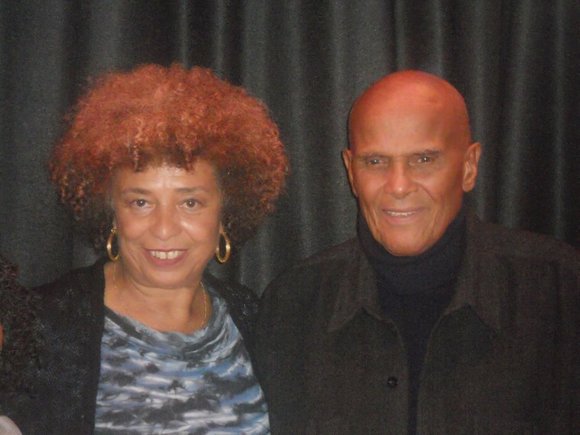 Angela Davis and Harry Belafonte: Where do we go from here?

"Imagine what might have been possible had we taken to the streets a day after inauguration, to celebrate Obama's victory and to pressure his administration to move on the issues we are most concerned about?" Davis rhetorically asked, opening her presentation. "We should have called for the immediate closing of Guantanamo, and of course, we can never expect to elect a president that will lead us to the promised land--we have to do that for ourselves!"

The former political prisoner of war thanked "all the people who made it possible for me to hear Romney's concession speech," and acknowledged that Obama's successful re-election was due in part to "the organizing efforts of the labor movement of unions all over the country, the perseverance of Black and Latino communities that resisted voter repression."

Belafonte mentioned the value of education, unity and the indomitable will of the people, which he viewed as essential to achieving the progress made in the last few decades.

During the 1960s and '70s, he said, "We gave of ourselves fully to organizations we knew were not only of us, but from us and because of us. Nobody wanted to hear the stories that had to do with slavery, with transient white folks who went berserk, destroying the indigenous people."

He also spoke about the influence and responsibilities the current generation has future ones:

"Those who are around my age won't be around much longer," suggested the 80-year-old entertainer. "This mission is specifically for the youth, who are the inheritors of the future, and what role will they play in it. I admire young people. Service to humanity is to use art as a tool to inspire and document the world that we saw and be able to resist those who had commanded a space that artists were required to deal with, when it came to having our voices heard."

The Columbia professor shared similar sentiments: "When I was younger, I remember that we thought the revolution was going to happen tomorrow. The world was supposed to be completely transformed. We never would've been able to imagine this future-present that we are living today, which was unimaginable as a future 30-40 years ago. There are ways we can bring people together in mass movements that were not conceivable at that time. I love the idea of talking about socialism and communism in the 21st century. Capitalism is devastating the planet."

Davis directly addressed some who expected a rapid change after Obama's election to the Oval Office, change which has yet to--and may never--occur.

"Many people who were brought out by that first campaign--especially those who had never before been moved to get involved in electoral politics--almost forgot the limits of electoral politics," she said. "Perhaps they forgot that this was about electing a president of the same imperialist, militarist, racist United States of America. But what was achieved four years ago was still earth-shaking, and we should never forget that, even if the last four years have not been what many people had hoped it would be."