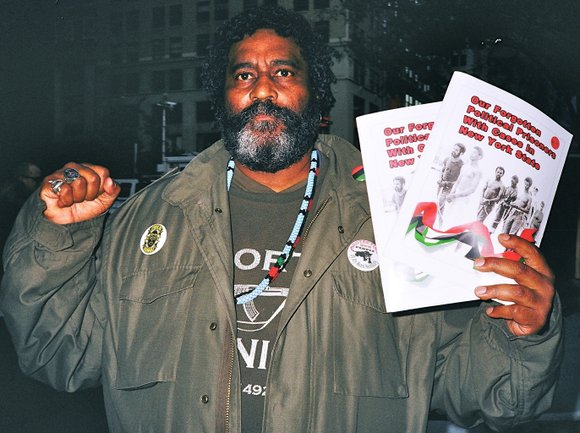 "It's a Panther saying that we keep a red book in our back pocket and Malcolm in our heart," Black Panther Brother Shep shared with the AmNews as he stood on Lexington Avenue and 125th Street on Friday, Dec. 9 to assist with "Serve the People Day," sharing free food and clothing with the public.

Brother Shep, a Bronx native, became a member of the New York chapter of the Black Panther Party in 1973 at the age of 19. As he stood outside on a chilly December afternoon wearing a shirt that displays Panther pride and a necklace with a Black fist pumped, Brother Shep kept an eye on the peaceful crowd that lined up to receive warm food on plastic plates and bottled spring water. There was no NYPD presence, but members of the Young Lords and Zulu Nation volunteered.

He noted, "I grew up amongst the Panthers. A lot of us who were young were protesting the Vietnam War and what was going on in South Africa with apartheid. Even the music back then was all about the Black culture fighting the struggles."

"What a lot of people fail to realize is that the Panthers were three-quarters women, and when that split came, we lost a lot of our members, because the women were not agreeing with the split nor did they want to get caught up in either side. Plus, you had the Panther 21, which really hit us hard."

As the Panthers went through their tribulations with the government as well as infrastructural issues throughout the '70s, some went to college. Brother Shep was one who did just that. Starting his college studies at Hunter College in 1974, he and the Panthers were a key element in the formation of the Black Student Union there, which gave Black students a platform to not only expand their intellectuality but the chance to participate as a collective. He was also the East Coast distribution manager for the Black Panther News Service while attending Hunter.

"Dr. Ben and Dr. Clark, I always say that I had the best. Back then, it was free tuition and open admission," he said. "We also had the professors go to the prisons and help teach the inmates as well. It was the inmates in prison who told the professors about Hale House, which at the time was not getting any funding-we set up a work-study and I started working with the kids there. Actually, that is how I got my start in child care," he recollected.

Brother Shep completed his studies at Hunter in 1980, where he double majored in political studies and Africana-Black studies. His efforts as a volunteer have spanned numerous organizations, from helping Harlem's Hale House for Children to the Children's Village and St. Mark's Youth Emergency Shelter in the past to currently donating his time and guidance to the City College of New York's Morales-Shakur Community and Student Center.

He has become a credible and respectable child care worker who has been a group home supervisor at the Mission of the Immaculate Virgin, senior house parent at the New York Human Resources Administration, chief deputy program master at Vision Quest and executive director for the Knox-Gates Neighborhood Association. He is currently the outreach/youth program director for the Safiya Bukhari-Albert Nuh Washington Foundation and program site director for the Unity Neighborhood Center, which is based in the Bronx.

Throughout the years, Brother Shep has seen his battles. He smiled as he remembered how they fought for the building that holds the Schomburg Center. "They were going to sell it to West Germany; we stopped that. We did a jazz concert, Gil Noble performed at the concert, plus he did a piece on his show, 'Like It Is,' and we had a full spread in the Amsterdam News. We stopped that sale."

He added that the lessons and knowledge he has learned from the Black Panther Party are a key reason he continues to give back to the communities of New York City.

Another cause Brother Shep holds close is that of the political prisoners. In a serious tone, he stated, "There are over 60 former Black Panthers who are in prison now, and they are forgotten about." He elaborated, "My primary thing is working with political prisoners-what we do is bring material and legal support to them."

When the topic of Mumia Abu-Jamal (Brother Shep was co-founder of the Free Mumia Coalition in the 1990s) and the removal of the death penalty from his prison sentence arose, Brother Shep shared these words in a calm manner: "He is a comrade and we are the same age. It is a step." He showed his faith in fighting for the innocence of political prisoners such as Abu-Jamal, who put their lives on the line seeking freedom against the Black struggle and oppression.

As the topic went from Abu-Jamal to Mutulu Shakur, Brother Shep said he is far from forgotten and that plans to keep his fight going are prevalent. "We are working on a two-day benefit that will be for Mutulu," he said.

This awareness is part of the reason Brother Shep is part of the Anti-Police Terror and Community Control of the Police Facilitator-Certification Workshop starting Jan. 24, 2012, at the Morales-Shakur Center. "You have to know your rights, and this program organizes you to know what to do if there is a murder or brutality in your neighborhood." He described the importance of this eight-week program, which will take place every Wednesday: "We teach you how to have your retainer for your lawyer, how to have a private investigator and how to maintain a connection with journalists."

Brother Shep's mission is far from over, as his journey continues with his involvement in helping the community, from teaching youth to helping feed and clothe adults who are struggling in the current economy. These are prime examples, he said, of the need to keep going and a true testament to the traditional community involvement that goes back to the Panthers' free breakfast for children programs.

He looked around the crowd of people receiving clothes and shared a story. "I remember my mom asking me what I wanted to be when I grew up, and I said, 'A cowboy.' She said, 'Boy, there is no more cowboys.' When I was working with Vision Quest, they had a unique program based on Native American philosophy to take teenagers who were in trouble and teach them how to build a teepee and tent and drive a wagon. We traveled from Pennsylvania to Texas, and we did this by wagon-you see a lot going four miles per hour," he laughed.

"I had a picture of me taken while I was sitting in a wagon with a hat on and sent it back to my mom, saying, 'Here I am,'" a reminder of his cowboy wishes from childhood. As a Black man in America, Brother Shep may not have been a cowboy in the Western sense, but in New York, he proves once a Panther, always a Panther, and that is just as heroic.

To inquire about any of the programs Brother Shep works with or to donate food or clothing for future drives, call (212) 650-5008 or email Panthershepcat@aol.com.