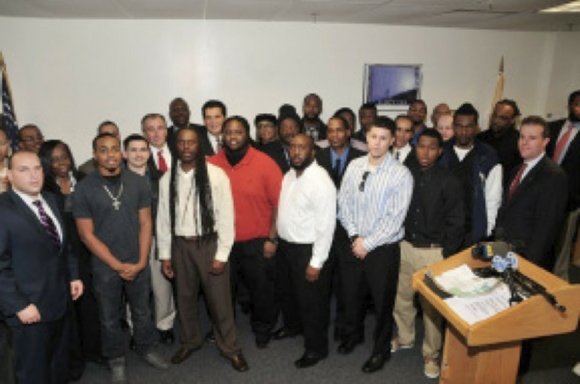 Close to 5,000 people have been employed as a result of the jobs that have been made available to clean up after Hurricane Sandy. Thanks to $27 million from the Disaster National Emergency Grant, jobs cleaning up after the October storm have helped those who have been out of work.

Workers who lost their jobs as a direct result of Hurricane Sandy or workers who were unemployed prior to the storm were eligible to apply for the temporary positions.

"One of the ways we can help New York recover is to engage New Yorkers themselves in rebuilding their communities," said Federal Coordinating Officer Michael F. Byrne. "We will have a stronger recovery by having employees who are personally vested in its success."

Similar jobs were available throughout New Jersey, where Sandy hit the hardest. Essex County was awarded an initial installment of $420,957 to hire 105 people to begin restoring Essex County in the wake of the storm. More funding will be released by the state Department of Labor and Workforce Development, which has received $5.1 million of the national emergency grant and requested last week that the U.S. Department of Labor release the remainder of the National Emergency Grant.

"Through the grant, we've already put nearly 100 people to work on the recovery effort, and we have government agencies requesting to put another 1,300 workers on the streets in 16 counties. We are prepared to secure additional federal funding if needed to get the job done," said Commissioner Harold J. Wirths.

Grants have been awarded to Belleville, Bloomfield, Caldwell, Fairfield, Irvington, Livingston, Nutley, East Orange, Orange, the East Orange Water Commission and Essex County government. The city of Newark will be receiving a separate grant of $185,221 beyond the funds issued to Essex County to bring on another 45 workers in the cleanup effort.

The Department of Labor is assisting local communities to identify and hire workers. Individuals who are interested in applying for a job under this grant are encouraged to contact the Department of Labor at 1-888-4-NYSDOL (1-888-469-7365) or by visiting www.labor.ny.gov/sandyjobs. Individuals can also visit their local Disaster Recovery Center or One-Stop Career Center.