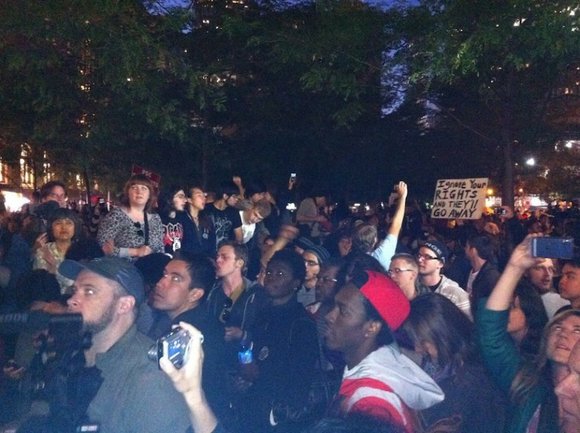 Hundreds showed up in the wee hours of the morning at Zuccotti Park, the home base of the Occupy Wall Street protests, to protect the park from Mayor Bloomberg, who originally ordered the NYPD to clear Zuccotti Park for cleaning at 7 a.m.

"The enforcement action you are requesting raises serious First Amendment and other legal concerns. Under the guise of cleaning the park you are threatening fundamental constitutional rights. There is no basis in the law for your request for police intervention, nor have you cited any," wrote attorneys associated with the National Lawyers Guild-NYC Chapter that have been representing people at Occupy Wall Street.

Similar strategies were used in Austin and Spain to clear out occupation protests. But at around 6:30 Bloomberg and the owners of Zuccotti Park's decision to postpone off the cleaning of the park made its way to the hundreds there to protect it and a great chant of, "the people united will never be defeated," rose from the crowd.

However the protestors had planned to allow the city to clean 1/3 of the park. "At 7am as a show of good faith we will allow Brookfield sanitation to re clean out park in 3rds. We will watch them clean the 1st third of our park. If the police then do not allow us to re-occupy that section we will gather non violently in the middle of our park and link arms," read a statement forwarded last night among members of the Occupy Wall Street People of Color Working group.

Many people called in support for the protestors before the cleaning was called off. The Unions, who announced their support of Occupy Wall Street last week, came out in force to protect the park. AFL-CIO called on its members to "stand on guard at the park all night against a planned eviction and police attack." The Working Families Party also called on its members to go downtown to protect the park.

"If you can, come to Zuccotti Park tomorrow morning at 6 a.m. to stand with the protesters at the moment when they need us most," read a letter from moveon.org to its listserve. "And right now call the city at 311 or 212-NEW-YORK (212-639-9675), and demand that Mayor Bloomberg respect the protesters' First Amendment rights and not interfere with this peaceful occupation."

Even Manhattan Borough President Scott Stringer and Community Board 1 Chair Julie Menin urged the City yesterday to continue negotiations with Occupy Wall Street in advance of the city's plans to clean.

Some protestors were arrested durring a march that took place later this morning.