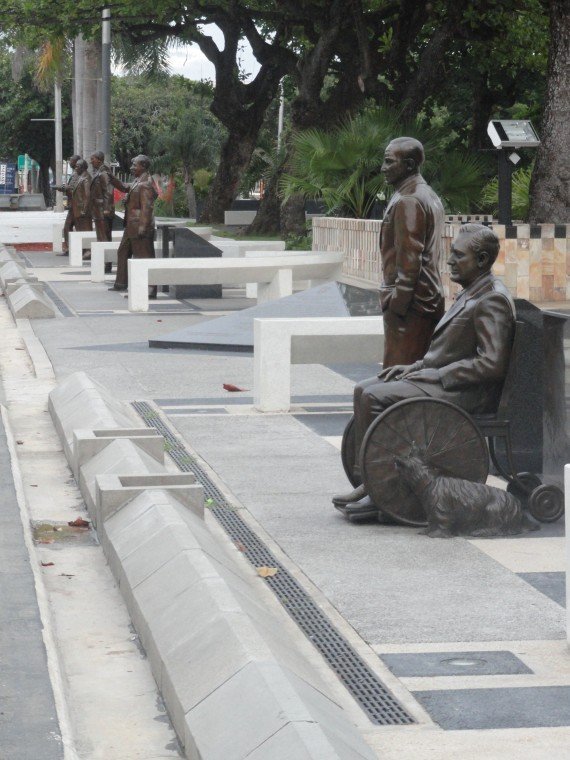 Honestly, this is the life! Sailing on the gorgeous ship--the ms Eurodam from Holland America Line--followed by a fun-filled first port day in Grand Turk in Turks and Caicos (Part 2 of this series), and now a stop in the picturesque island of Puerto Rico.

Puerto Rico has long been one of my favorite travel destinations, and I was downright giddy at the prospect of once again basking in its amazing fusion of vibrant people, multi-hued facades, intoxicating scents and jaw-dropping scenery.

Embraced by both the Caribbean Sea and the Atlantic Ocean, the main island of the Commonwealth of Puerto Rico (Puerto Rico meaning "Rich Port") is the smallest of the Greater Antilles; the commonwealth also encompasses the two smaller islands of Culebra and Vieques off the east coast and the tiny island of Mona (located halfway between Puerto Rico and the Dominican Republic) to the west.

About 100 miles long, 35 miles wide and roughly the size of Connecticut, the island possesses a very picturesque and diverse topography, encompassing nine lakes, over 50 rivers and streams and the Cordillera Central (central mountain range) running through the center of the island and rising between 1,000 and 3,000 feet. The highest peak--Cerro La Punta--is 4,398 feet high.

The Puerto Rican people are a gorgeous amalgamation of the native Taino Indians, Spaniards and Africans, and these three distinct peoples are palpable in every aspect of the cultural landscape here.

It's hard to capture the essence of such a magnificent island in just a few words, or in only a full day, which was the amount of time I had on this latest visit. Nevertheless, embarking upon your own self-guided tour (on foot or via the city's trolley cars) will reveal just enough to captivate your senses, infuse you with the culture and draw you back for more.

Must-see sites and attractions include the Raices Fountain, a beautiful and inspiring statue and water feature situated where the Paseo La Princesa promenade meets San Juan Bay; the fountain is a tribute to Puerto Rico's three founding cultures.

For 250 years, the Casa Blanca ("the White House") was the residence of the descendants of Juan Ponce de Leon, the first governor of Puerto Rico. Today, it is a museum of 16th- and 17th-century family life and has a miniature replica of an ancient Taino village. Casa Rosa ("the Pink House") was built in 1812 for the Spanish army and now serves as a day care center for the children of government employees.

Puerta de San Juan ("San Juan Gate")--the point of re-entry inside the walls of the city--is one of six original massive wooden doors that closed at sundown to protect the residents centuries ago, while La Muralla ("City Wall") was constructed with sandstone blocks up to 20 feet thick.

El Palacio Santa Catalina, known as La Fortaleza ("Santa Catalina Palace," "The Fortress"), built in 1540, is the oldest governor's mansion in the Western Hemisphere still in use.

Old San Juan possesses some of the oldest churches in Puerto Rico, including Iglesia San Jose ("San Jose Church"), built in the 1530s as a Dominican monastery chapel dedicated to Saint Thomas Aquinas; the Jesuits who took over in 1865 renamed it.

Then there are Catedral de San Juan ("San Juan Cathedral"), the first church on the island and the oldest church in the Western Hemisphere, and Capilla de Cristo ("Christ Chapel"), a small chapel built in 1753 which became a center of devotion where the faithful left offerings of gold and silver that were eventually molded into an elaborate altar, candelabras and other religious objects now on display.

One of the newest and most poignant historic sites in Puerto Rico is the Monumento a la Memoria del Holocausto ("the Holocaust Memorial"). Although many think of the Holocaust only as a remembrance of the thousands of Jewish people who were murdered, it is really in numerous ways about the history of mankind and the atrocities that a particular people sometimes are forced to endure, while also imploring future generations to ensure that they are not repeated. Forming a semi-circle behind the beautiful main sculpture is a series of historic markers that illuminate various aspects of that time in history and the people involved.

Right next to the monument is another memorial, in this case to the Masacre de Lod ("Lod Masacre"), referring to the 1972 murders at the Lod Airport (now Ben Gurion Airport) in Israel, when three Palestinian terrorists opened fire on passengers waiting for their luggage, ultimately wounding 78 and killing 26--17 of whom were Puerto Ricans traveling to the Holy Land.

Another eye-catching historic site in town is the Walkway of the Presidents, situated, fittingly, across the street from the San Juan Capital Building. Here you will find spectacular bronze life-like and life-sized statues, accompanied by historical markers, of Presidents Ford, Kennedy, Eisenhower, Truman, Roosevelt, Hoover and, my favorite, Obama!

Or in English, absolutely delicious!

Although providing just a snapshot of the excellent epicurean adventures in Old San Juan is like getting all dressed up for a fancy dinner then only ordering an appetizer, I couldn't leave here without giving you at least a few morsels about the amazing Puerto Rican, Caribbean and international cuisine served everywhere from quaint neighborhood cafes to upscale establishments. Again, there are so many wonderful ones to mention--don't hate it if one of your faves is not on the list!:

Alas, it is time to head back on the ship and set sail for our last two exciting ports of call: St. Thomas in the U.S. Virgin Islands and Half Moon Cay in the Bahamas.