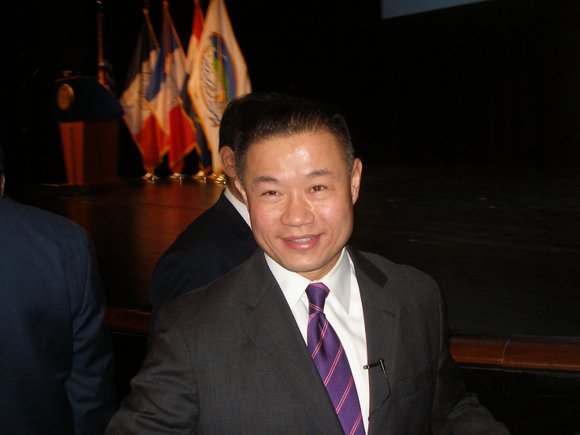 An avalanche of expenditures and savings were expected from City Comptroller John Liu two weeks in a packed theater at John Jay College for his State of City address, but he brought the audience to its feet toward the end of his nearly hour-long speech when he said, "Let's work to make New York City a safer place by taking semi-automatic assault weapons off our streets and by abolishing Stop & Frisk."

This comment brought the longest standing ovation perhaps because the tragedy in Newtown, Conn. at Sandy Hook Elementary School was still a lingering pain in the nation.

Liu also aroused listeners with his proposal to offer free CUNY tuition to the top 10 percent of New York City public school graduates. "The offer of free tuition would help motivate students and elevate CUNY, one of our City's most valuable gems, to the level of a competitive prize," he explained. "It would also be a life-saver for many working families who are struggling to send their kids to college. We must do more to make college affordable."

While these were crowd pleasing promises, most had come to find out the exact status of the city's financial situation amid all the talk about an impending fiscal cliff.

To this end Liu called for a dramatic hike in the minimum wage from $7.25 to $11.50 per hour over the next five years. Such a measure, he added, would help the "working poor" climb out of poverty.

Doing this, he said, "will only help to rebuild our middle class." Moreover, and once again getting a loud response from the audience, he asserted that "We need policies like paid sick leave, expansion of temporary disability insurance, and the creation of paid family leave insurance."

He commended the City Council members who are sponsoring paid sick leave legislation.

But folks had come to hear the big budget items and Liu did not disappoint as he began with noting that his office had approved "more than $850 million in emergency expenditures" in the recovery process in the wake of Hurricane Sandy. "The City has sustained lost economic activity to the tune of billions, with small businesses taking the hardest hit," he said. "Recovery of the massive property and infrastructure damage will require tens of billions."

Some of the revenue doled out to pick up the pieces after Sandy will come from the elimination of "outdated corporate tax loopholes," he announced, "which cost the City more than $500 million each year."

Among the bullet items was a listing of successes accomplished by his office over the last year, including the recoupment of $466 million in cost overruns from CityTime, the identification of fraudulent billing on the City's 911 call center upgrade, emergency spending approvals for the response and recover related to

Sandy, and more than $1 billion saved as part of the City bond refinancing. Overall, Liu dropped a bevy of figures and often with ways and means to gather the needed revenue, though much of what he proposed will have to be approved by the state, and for that the city will have to hope the governor and the legislature is prepared to thaw the frozen gridlock.

Several spectators' indicated that Liu used the moment well to enhance his mayoral bid, which still hasn't been announced, nor did he choose to address any of the ongoing charges of fraud encircling him.

And he certainly didn't hurt his chances by summoning a choir of children from his alma mater in Queens, or a well-choreographed dance troupe, and a Mexican trio of violinists to set a pleasant tone for his address.

Hey, several more events like this and Liu will ratchet up his chances to lead the city, if and when he announces he's a candidate.