FreshDirect and the Bronx: Thumbs up or thumbs down? 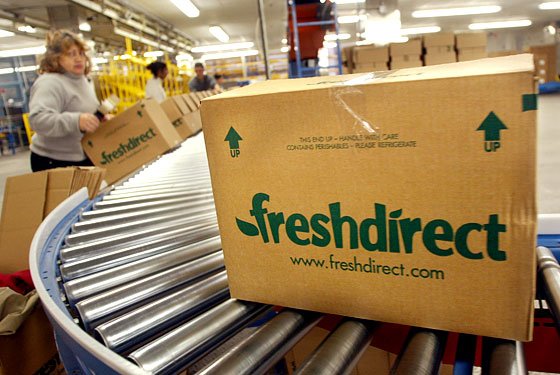 One of the few things that unite the mayor, the governor and the Bronx borough president--outside of rhetoric--is receiving opposition from some of the people.

Michael Bloomberg, Andrew Cuomo and Ruben Diaz Jr. announced last week that FreshDirect will invest $130 million in capital investments, tax breaks and tax credits to build the grocer's new headquarters and operations at the Harlem River Yards in the Mott Haven section of the Bronx. The move from their current Long Island City, Queens, location would help retain close to 2,000 existing jobs and add an additional 1,000. According to all parties involved, the construction of the new facility will result in the creation of almost 684 construction jobs and a $255 million impact on the city's economy.

Jason Ackerman, CEO of FreshDirect, was happy with the new deal and new location.

"From day one, New York has been our home, and we are grateful for the support of Governor Cuomo and Mayor Bloomberg in making New York a place FreshDirect wants to stay and grow in, and for Bronx Borough President Diaz welcoming us," said Ackerman in a public statement.

"With significant growth in our customer base, we need to expand our operations. A new state- of-the-art facility at the Harlem River Yards in the Bronx would allow us to operate more efficiently, maintain our relationships with New York state vendors, local farmers and purveyors and continue our long track record of growth and job creation in New York."

"I welcome Fresh Direct to the Bronx with open arms," said Diaz Jr. "This iconic company will not only stay in New York where it belongs thanks to this deal, but they will bring 1,000 new jobs with them to our borough. More and more companies are discovering that the Bronx is a great place to do business, and FreshDirect's move to our borough is a major, positive step forward for our economy." The plan has also won the approval of the Bronx Overall Economic Development Corporation.

But not all are singing the praises of the new move. Councilwoman Melissa Mark-Viverito wrote an open letter to the mayor, governor, the Bronx borough president and FreshDirect asking why the deal was made without the input of the people and how they could leave several things unaddressed.

"To hold a public hearing after an agreement was already announced in the press, and then schedule a final vote just a few days later, makes the city's agreement with FreshDirect seem like nothing short of a done deal," said Mark-Viverito. The councilwoman talked about labor issues and health concerns regarding FreshDirect's new location.

"FreshDirect's labor practices have concerned me since a number of troubling allegations were first brought to my attention as a member of the Black, Latino and Asian Caucus," said Mark-Viverito. "According to Teamsters Local 805, FreshDirect has made concerted efforts to block the union from organizing in their workplace, including holding anti-union meetings, passing out misinformation on what union representation means and making threats.

"As the unionization campaign was gaining steam several years ago, ICE initiated an audit of the legal statuses of FreshDirect employees, causing around 200 workers to leave; many believe this action was an attempt to squash the organizing drive. FreshDirect has reportedly also refused toenter into a neutrality agreement with Local 805 to allow the organizing efforts to proceed without interference."

The AmNews contacted Diaz's office for a response to the criticism but didn't receive anything as of press time.

During a public hearing in lower Manhattan two weeks ago, a few immigrant workers who had managed to move up in the ranks at FreshDirect said that the firm had been great to them and they wished the opposition would let them do the same. The hearing also raised concerns about truck traffic going through neighborhoods that already have some of the highest rates of asthma in the city and waterfront use. It doesn't help matters that the only Bronx neighborhoods that FreshDirect delivers to are Riverdale and Woodlawn, which are more affluent, predominately white enclaves.

While FreshDirect promises to deliver to more Bronx neighborhoods, no company members were available for a response to community concerns or Mark-Viverito's.

However, the community has organized, against all odds, to try and stop FreshDirect's construction. On OccupyTheBronx.org, there's a petition available--courtesy of South Bronx Unite Stop FreshDirect--that citizens can sign in protest of FreshDirect.

"We, the concerned residents of the South Bronx, stand united in opposition to the proposal to relocate FreshDirect to the Harlem River Yards in the South Bronx," states the manifesto. "We believe that the plan to utilize our public lands without community input demonstrates a total lack of cooperation and consideration with the constituency that will be directly and adversely impacted by the proposal."

Some of the grievances include insufficient environmental analysis of the land in the Harlem River Yards, greenway and waterfront access, lack of FreshDirect delivery to non-affluent Bronx neighborhoods and no alleged penalizing of the company if it doesn't hire Bronx residents for permanent jobs. FreshDirect said around 400 of their current employers call the Bronx home.

None of this is of much a concern to Bloomberg, who praised the agreement.

"Making sure that companies like FreshDirect can grow and invest in New York City is a key part of our strategy to rebuild and diversify our economy," said Bloomberg in a public statement. "A thousand new jobs at the Harlem River Yards is great news for the Bronx and a welcome boost to our city's economy."

But at what cost to the redheaded stepchild of the fiveboroughs?