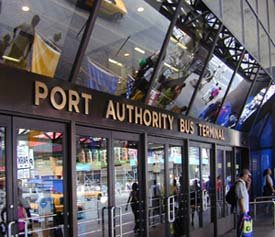 The Port Authority of New York and New Jersey--the mammoth bi-state public transportation agency that is overseeing the construction of the World Trade Center in New York--is dysfunctional and has wasted billions of taxpayer dollars due to sloppy bookkeeping and gross mismanagement, according to a study released earlier this month.

In a blistering report made public a few weeks ago, Navigant Consulting, a respected Chicago-based management consulting and accounting firm, called the Port Authority "a challenged and dysfunctional organization suffering from a lack of consistent leadership and siloed underlying bureaucracy."

The agency was also accused of having "poorly coordinated capital planning processes and a lack of transparent and effective oversight of the World Trade Center program."

The consulting firm revealed its findings after spending months reviewing and analyzing the books of the beleaguered agency.

The Port Authority has been under constant fire by New York Gov. Andrew Cuomo and New Jersey Gov. Chris Christie for its exponential cost overruns and frequent flubs and delays regarding work at ground zero.

Added to the mix is the barrage of complaints from commuters over increasing tolls on the heavily traveled George Washington Bridge and Lincoln and Holland Tunnels late last year--tolls were raised by as much as 50 percent.

The increase went into effect despite protests and rallies from financially strapped commuters.

Port Authority officials argued that the toll hikes were necessary to offset a big drop in revenue, the economic slump and the ever-increasing tab for the World Trade Center project, which now stands at about $11 billion.

However, the recent audit adds fuel to the laundry list of complaints from consumers and politicos in both states that the agency is overwhelmed, poorly managed and grossly incompetent.

In January, former New Jersey Attorney General Paula Dow was appointed in a special watchdog position at the agency by Gov. Chris Christie.

Dow said, "It [the Port Authority], like a lot of others I've worked in, needs a lot of attention at this time." Commuters agreed.

"They don't know what they're doing. They are doing a terrible job! That's why tolls keep going up!" one blogger posted. In a statement released late Tuesday afternoon, Port Authority Executive Director Patrick Foye said the agency has reviewed the auditing firm's recommendations and would begin implementing changes, including an overhaul of some of its operations and structure.