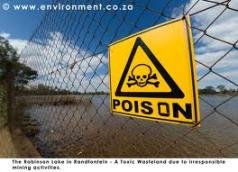 Feb. 21 (GIN) - An underground lake of acidic mine water is expected to reach environmentally critical levels under Johannesburg by June 2012, according to government officials and scientists speaking to the press this week.

Water has already started leaking from abandoned mines west of Johannesburg and is rising on average by about 46 feet a month, independent studies have found.

Johannesburg was built over its gold mines and the threatened land is occupied by some of the country's biggest firms and some of its most densely packed townships and suburbs.

Planning Minister Trevor Manuel said the government had been talking to mining firms about clean-ups but many of the original mining firms have closed or were taken over decades ago.

Clean-ups were high on the radar at the recent "Mining Indaba" - a major conference earlier this month that drew hundreds of visitors. Mamphela Ramphele, chair of the gold-mining company Gold Fields and a director at mining conglomerate Anglo American observed: "A lot of firms say that the problems linked to mining are beyond their control. They should however realize and acknowledge that the extraction of minerals has a hefty social cost."

"Companies must own the problem and use their innovative power to find solutions."

Abandoned and old mines cause water pollution and Acid Mine Drainage (AMD). AMD is the outflow of acidic water that is polluted with high concentrations of metals, sulphides and salts from derelict mine shafts, and discharge from open pits and mine waste dumps.

"South Africa has some 6,000 derelict and ownerless mines," said Melissa Fourie, director of the Centre for Environmental Rights."The problem is that more and more mines are coming near the end of their lives. People are aware of this problem and are worried."