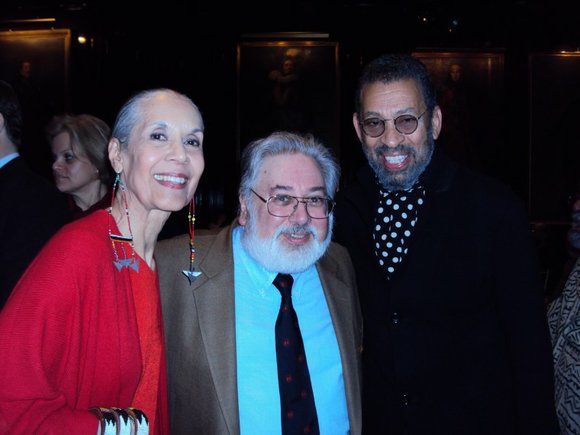 The brilliant actor/director Grisanti, one of de Lavallade's students at the Yale School of Drama, who served as the master of ceremonies for the occasion, royally entertained everyone with witty conversation, jokes and delightful anecdotes of that special period of de Lavallade's life as a professor of movement at Yale. He shared that, in addition to teaching, this fruitful period also further propelled her career as an actor, citing her award-winning role as Titania in "A Midsummer Night's Dream." Grisanti then read a lovely letter from Meryl Streep, another of her superb Yale students, who had sent her birthday greetings which ended with "Happy Birthday to one of the most beautiful spirits--physical and spiritual beauty--on the Eastern Seaboard."

Jeremy Smith, yet another student from Yale, read a message from the former dean of the Yale School of Architecture, Robert Stern, the recipient of the 2010 National Medal of Arts.

Hines exclaimed, "I'm in heaven. The greats are sitting here!" He recounted how de Lavallade had encouraged him as a dancer by telling him, "Let it happen. Find the joy."

Geoffrey Holder proudly told everyone, "I met the best." He recounted how he met de Lavallade at age 25, when they were both in the Broadway production of "House of Flowers." He fell in love, proposed and married his soulmate, who he has been with for 55 years. He the asked everyone to join him in singing "I'll Be Loving You Always."

"I want to thank you all for coming," de Lavallade told her guests. She asked everyone to light the cupcakes on the tables, then requested that everyone join her in singing "Happy Birthday," first to her, then to themselves. Soon, the amazing Carmen de Lavallade had the entire Players dining room swaying and moving their hands and bodies. And just like that, as Hines had shared earlier, her magic had taken over the Players. Everyone let it happen. Their single quest: "To find the joy."

The "Moonlit Window" series takes an insightful look at the lives of spirited, life-changing people, who are living extraordinary lives in their quest for "what it means to be human."