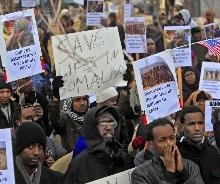 Jan 3 (GIN) - A major bank in Minneapolis has closed the accounts of companies wiring money to Somalia from their U.S.-based families, creating a crisis for Somalis who depend on the U.S. funds.

Minnesota, home to the largest Somali-American population in the U.S., reportedly sends about $100 million back home each year, according to the U.S. Treasury. Several hundred Somali-Americans rallied in Peavy Park last week to protest the action.

They carried signs reading "Somalis are starving because of U.S. Bank Policy."

Sunrise Community Banks explained that under new Homeland Security rules, the bank could face prosecution if their transfers were received by terrorists.

A spokeswoman for the Somali-American Money Services Association in Minneapolis, said 15 money-transfer businesses stopped taking money because they would no longer be able to execute transactions through Sunrise Community Banks.

"They don't have a bank account as of tomorrow," she said of the businesses, which are sometimes known as hawalas.

"I don't know what to do," said Abdirahim Hersi, 27, who sends $500 every month to his mother, daughter and siblings in the Dadaab refugee camp in Kenya, near the Somali border. "I'm really sad."

"It's wrong to close off the lifeline!" shouted U.S. Rep. Keith Ellison, D-Minn., who attended the rally.

The bank said it would consider extending the service if it was given a way to minimize its risk. But US Attorney B Todd Jones said a waiver is not possible. "The Department of Justice doesn't give anyone a free pass right up front for possible future criminal activity," Jones said.