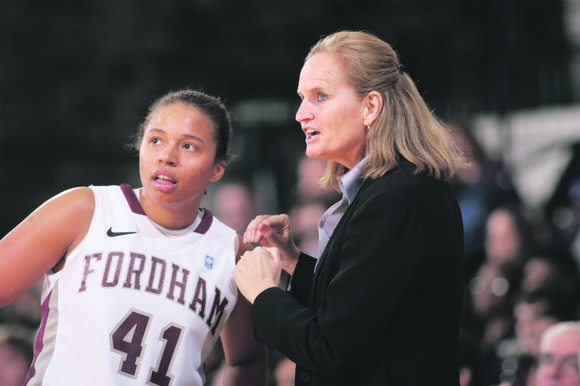 "I love a challenge," said Stephanie V. Gaitley, who was named the head coach of Fordham University's women's basketball on April 1, 2011. Gaitley spent the past three seasons at Monmouth University, leading the Hawks to a WNIT appearance.

Prior to that, she was at Long Island University, and being told she will not continue her winning ways at Fordham only serves to fire her up. "I feed off of that energy," she said.

Five years ago, Fordham was in a dismal losing streak. Cathy Andruzzi got the team back on its feet and in 2010 returned the Rams to the Atlantic 10 Championship tournament for the first time in four seasons. Now under Gaitley's leadership, goals are high, but expectations are realistic.

"When you're laying the groundwork, the Xs and Os are certainly part of the game, but for me it's really the people," said Gaitley, who praises the commitment of the Fordham administration. "I was extremely impressed with the people and them wanting to be successful and their understanding of the current culture and knowing that it's going to take time. It's not going to be a quick fix. It's a three-year process before we really reap the benefits."

Gaitley is joined at Fordham by several members of her staff from Monmouth. She has also brought four players. Freshmen Christina Gaskin and Taryn Durant are already making an impact. Junior Erin Rooney must sit out this year after transferring and a request is pending for Marah Strickland to be granted a sixth year of eligibility after dealing with health issues. The Rams' lone senior, guard Becky Peters, a crucial part of the team's revival, has proven to be an effective leader and is extremely receptive to Gaitley's coaching.

After one of the best non-conference seasons in 10 years, the Rams headed into Atlantic 10 play hoping to garner the most ever conference wins. However, they lost their Atlantic 10 opener 54-33 against George Washington at the Charles Smith Center in Washington, D.C., where they had an opportunity to meet Vice President Joe Biden.

A big issue this season is the lack of post players willing to play with their backs to the basket. For next season, Gaitley has signed 6-foot-3 Samantha Clark from New Jersey, currently one of the top 100 high school players in the country. "We're seeing signs of what we can be. The biggest hurdle we had to climb was getting them to win...You have to win in order to get that feeling of hating to lose. They're right where they need to be," said Gaitley about her team, which will host Rhode Island on Saturday at 2 p.m. at Rose Hill.