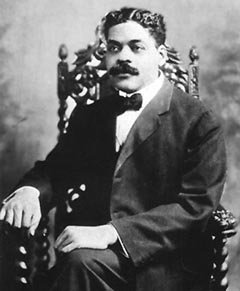 Rather than sitting inside, waiting for the snow to melt and spring to arrive, why not bundle up and head over to the Schomburg Center, where from now until the end of February a series of enlightening lectures and discussions will be held?

What better way to begin than with a conversation on Arturo Schomburg's birthday? The annual "Schomburg Conversation" on Tuesday, Jan. 24, from 6-8 p.m., will explore the past, present and future of the center and feature a discussion with Elissa Blount Moorhead of the Weeksville Heritage Center and artist, author and curator Danny Simmons, director of the Corridor Gallery in Brooklyn.

A few days later, on Jan. 28 at 4 p.m., the Schomburg Center will host the New York premiere of "More Than a Month" by Black director Shukree Tilghman, which explores how history is used as a tool in America's discussion of race. After the screening, the director will be joined by Schomburg director Khalil Gibran Muhammad and filmmaker Sharon LaCruise in a discussion moderated by Amanda Seales. If you can't make it, the discussion will be streamed on Facebook as well.

Tired of all the talk? Well, how about some music from the critically acclaimed Regina Carter on Jan. 30 at 7 p.m.? Part of the "Carnegie Hall Neighborhood Concert Series," Carter will be joined in the Schomburg's Langston Hughes Auditorium by a range of artists playing guitar, bass and the kora, a 21-string African harp, as she performs works from her latest project, "Reverse Thread."

Speaking of one of America's finest writers, Feb. 1 at 10 a.m. will see a birthday party for Langston Hughes in the space that bears his name. There will be a performance of his poetry by Daniel Carlton, which will help bring his work to life for those who have only read it on the page. Seating is limited for this event and registration is required. Contact schomburged@nypl.org or call (212) 491-2234.

The struggle for justice has been as diverse as those who make up the Diaspora. Twenty-five years ago, Gay Men of African Decent was founded to expand that struggle, and on Feb. 1 at 6 p.m., the Harlem community will come together at the Schomburg to celebrate its success and look toward the future.

One of the most highly anticipated events of the season will be the return of the "World Rapport" series starting on Friday, Feb. 17 at 6 p.m., with Harry Belafonte discussing his new book, "My Song," with the director of the Schomburg. The great actor, artist and activist will talk about his life and struggles in this free event.

On Feb. 21, the 52nd anniversary of the assassination of Malcolm X, the Schomburg will explore his lasting influence in a evening featuring Salman Rushdie, Ishmael Beah, Kathleen Cleaver and Darryl Pinckney, who will read his letters, speeches and works on the stage.

All of these events are free, but, of course, seating is extremely limited and registration is required. Visit www.schomburgcenter.eventbrite.com or call (212) 491-2040 to save your spot!