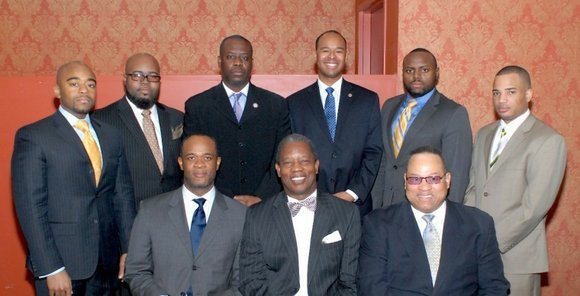 Dr. Martin Luther King Jr.'s spirit was alive and well as alumni from his alma mater came together to celebrate his legacy. Local graduates from the all-male, historically Black Morehouse College held their annual King Day memorial breakfast and fundraiser on Monday.

Dozens of members of the Morehouse Manhattan Alumni Association (MMAA) and supporters of the college packed in the newly renovated cellar of Harlem's Red Rooster restaurant for the annual event, now in its 22nd year. Among those who spoke at the event were Manhattan Borough President Scott Stringer and Rep. Charlie Rangel, whose son is a graduate of Morehouse College.

Rev. Michael Walrond, who serves as senior pastor of First Corinthian Baptist Church in Harlem, was the guest speaker at the breakfast. Walrond is a 1993 graduate of Morehouse and discussed leaving a legacy in life similar to King's. Stirring a cappella selections were sung by alumni who were members of the famed Morehouse Glee Club.

"It was our best event to date," said MMAA President Davon Snipes. "Financial resources should never stop a student from attending college. We are just leveling off that playing field and giving students that boost they need."

Alumnus George Peters, a 2004 Morehouse graduate, served as emcee for the breakfast, which also serves as a fundraiser for current students from New York City who are attending the college located in Atlanta.

Morehouse students Tislam Swift and Russell Short were this year's scholarship recipients. Morehouse was on the verge of sending me home for having a large balance; however it was the MMAA who helped me with a scholarship," said Short in a personal statement. "I sincerely thank the MMAA for their assistance. Had it not been for the MMAA, to this day, I highly doubt I would still be attending Morehouse College."

King graduated from Morehouse College in 1948, earning a bachelor's degree in sociology. He entered the school at the age of 15 as an early admission student. Students at Morehouse College celebrated the King holiday with a series of events including worship services, musical performances, forums and a day of community service at various sites across Atlanta.