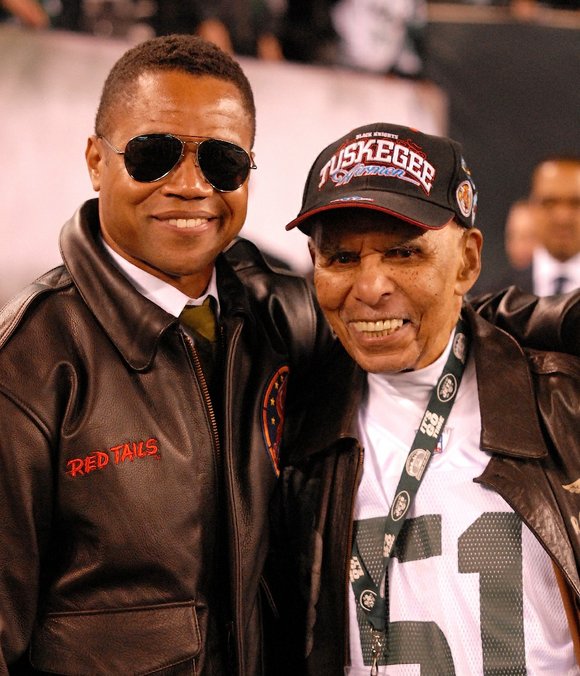 Dr. Roscoe C. Brown Jr., 89, still retains vivid memories of those dogfight scenes with German jets over Europe during World War II as one of the celebrated Tuskegee Airmen. Those memories were given a fresh veneer recently as he participated in a number of events in advance of the film opening of "Red Tails," including a weekend affair at the White House.

"It was a great reception of us," Brown said in a phone interview from his home on Sunday evening. "There were 20 of us invited, but the president and Michelle [Obama] did not stay because they wanted to see the film with their children."

Among his fellow airmen at the reception were Dabney Montgomery, Craig Lawrence and Wilfred DeFour. Brown, who is a former president of the Bronx Community College and currently hosts "Afro-American Legends" on CUNY-TV, said he has seen the movie five times.

"All of the characters in the film are composites, and it comes pretty close to the actual experiences we had during the war," Brown said. "And of course, one of the highlights for me was the re-created dogfights, which were digital but very well done."

He was particularly impressed with the dogfights with the German jets, but he stopped short of recounting his own bravery, along with being among the first to shoot down one of the jets.

What he did explain in detail was why the 332nd Squadron was called "Red Tails." They were called "Red Tails," he said, because of the distinctive crimson paint predominantly applied on the tail section of the unit's aircraft.

Brown acted as a consultant on the film, which opens this Friday in about 3,000 theaters across the nation. Already there are a number of pre-screenings to raise funds for Tuskegee Airmen. "While I was in D.C., I was interviewed 45 times," Brown related. "They were short four-minute interviews with different reporters getting a chance to ask questions."

One question that was asked repeatedly was the extent to which the film accurately depicted what happened overseas. "Well, as with most productions of this sort, there was a certain amount of poetic license," Brown explained. "But, artistically, it was a good job and I enjoyed it very much."

Any weaknesses? "I wouldn't say there were any weaknesses," Brown continued. "There were some things they left out, but overall, it captured a lot of what we experienced."

The film, which stars Terrence Howard and Cuba Gooding Jr., was two years in production, with many of the air scenes shot in Prague. "Neither Terrence nor Cuba are part of the flight scenes," Brown said. "These pilots are played magnificently by two young actors, Nate Parker as Easy Julian and David Oyelowo as Joe 'Lightning' Little."

While there are no significant roles for women, rap fans will be pleased to see Ne-Yo and Method Man among the cast. Brown said he acted as a consultant on the film, which was co-written by John Ridley and Aaron McGruder. "It was directed by Anthony Hemingway, and George Lucas was one of the producers," Brown added. "I was among several airmen invited to Lucas' ranch to share our impressions and memories."

It is too bad that fabled airman Lee Archer didn't live to see the completed film, though Brown said he was one of two airmen to whom it was dedicated. Archer died in 2010 and, along with Brown and Montgomery, was one of the mainstays of Tuskegee Airmen in New York City.

"Red Tails" has left Brown almost breathless with interviews, screenings and other events related to its release. Even so, he said he is by no means tired of helping promote it. "And if folks want to see an even more realistic story of the airmen, they can catch it on the History Channel," Brown said. "It's a Lucas documentary called 'Double V.'"

The documentary, according to Brown, is a perfect complement to "Red Tails" and contains real tales from those who know the story and continue the glorious legacy.