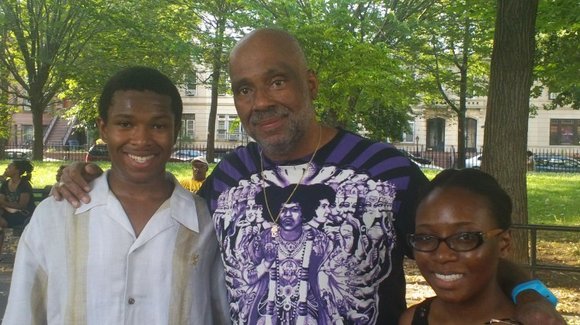 The Network Journal (TNJ) held its annual "40 Under Forty" Awards on Thursday, June 28 to recognize the next generation of African-American leaders "who are already exceptional performers in their respective industries and who are committed to the development of their community."

The awards reception and dinner, which was celebrating its 15th anniversary, was held this year at the Crowne Plaza hotel in Times Square and was sponsored by Wells Fargo and WBLS radio. The event was hosted by Roman Oben, former New York Giant and a 2003 Super Bowl XXXVII champion with the Tampa Bay Buccaneers, and Karen Nethersole, Esq., CEO of Full Circle NY and a former 40 Under Forty honoree.

Each year, hundreds of people are nominated to be one of the honorees, which are selected by a panel of judges.

"While the selection process presents quite a challenge to our judging committee, it is truly a privilege to announce the 40 winners from such an accomplished group of candidates," said Aziz Gueye Adetimirin, TNJ founder, publisher and CEO, in a press release. "Through events such as our recognition awards program, TNJ brings these accomplished professionals to the attention of our vast network of corporate affiliations."

This year's winners, all in their 30s, couldn't have been more excited to receive their awards on Thursday.

Most people would "say it feels like they are going to Disneyland or they won the lottery or any of those kind of things, but it's kind of a different feeling," said Shante Bacon, founder and CEO of 135th Street Agency, a strategic communications and experiential marketing firm that specializes in campaigns reaching the youth consumer and business professional.

"When you're an entrepreneur...the amount of work you put in, sometimes, for the output you get back is highly disproportionate. So when every once in a while you get to be celebrated for the work that you do, it just feels like a very refreshing break. I'm trying to soak up every second of every minute because at 1 o'clock I'm back to work," she said.

And work hard they do. Every 40 Under Forty honoree had lists of projects they were working on, some even stopping to work for a moment while they were at the reception. Each also had some words of advice for young professionals looking to make it in their fields.

Nicole Cokley, operating vice president of diversity inclusion and community service at Bloomingdale's, said finding and holding on to the right mentors throughout her career was key.

Aletha Maybank, M.D., M.P.H., a doctor who decided not to practice medicine and instead works for the New York City Department of Health and Mental Hygiene and is now breaking into media, said, "I think it's all about following your passion, no matter what. We're all skilled enough, we're talented enough to pretty much do almost anything we want to do."