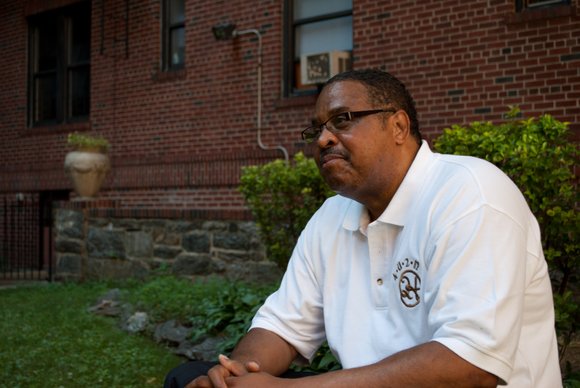 Quintin Hawkins is a Brooklyn entrepreneur who has, since 2001, had the drive and ambition to bring awareness to the young men of his community through his clothing line 4U2NV. But over 40 years ago, Hawkins worked for the Amsterdam News delivering newspapers as a young kid.

The name stands for four basic principles: If a child can do four (4) positive things in his life, he can U-turn (U); to (2) believe in yourself and God; no (N) is one of the most important words in the dictionary; and in the end, come out and be victorious (V).

Hawkins explained, "The single mom with two jobs who is still able to make the PTA meetings is 4U2NV; the blind man who walks the streets as a independent person is 4U2NV; and the recovering addict who is becoming a productive community member is 4U2NV."

In 2007, Hawkins trademarked T-shirts for the line with sayings like "Pull up your pants and raise your minds," "Raise it up for females" and "I'm bringing sexy back."

While many people believe the style of sagging pants was originated by men in jail, Hawkins explained that it originated in the late '70s, when men took pride in the designer underwear they were wearing and wanted to show their peers they could afford the clothing as well.

"When I was arrested, I went to a federal camp and we wore jumpsuits--our pants never sagged. We never sagged our pants to seek attention but to show we were coordinated," said Hawkins.

Hawkins has been on the local Brooklyn TV channel BCAT with the rap group G-UNIT, among other organizations. As time passes, Hawkins is picking his business off the ground and plans to have his clothes in stores such as Dr. Jays and Modell's.

In 2009, Hawkins became legally blind due to diabetes. Over the past few years, he has undergone 14 surgeries--eight surgeries in his left eye and six in his right eye. Despite this, Hawkins would not let his disability become a setback on his path.

He didn't want to be a prime target, so he started to make a new life for himself. Hawkins has volunteered at hospitals around the city, including Kings County Hospital, Lincoln Hospital and Brooklyn Hospital. He also volunteers with the Coney Island Generation Gap organization.

Hawkins was so brave and ambitious, in fact, that people did not believe he was blind.

He recently regained eyesight in his right eye. He believes being prayerful, having faith and having a great support team is what helped him regain his eyesight.

Aside from being a entrepreneur, Hawkins works with the Cohen and Jasse attorneys office as a personal investigator for personal injury cases. People in that office and Patricia Vestal are among the many who have been by Hawkins' side since day one.

During the time Hawkins lost his eyesight, Vestal kept the clothing line alive to help pay his medical bills. She helped brand the clothing line, taking it from an idea to a billboard promotion. Because of her, Hawkins was able to get back on his feet and continue to pursue his dreams.

"I never lost sight of my dreams and goals. Faith takes its course," he said.