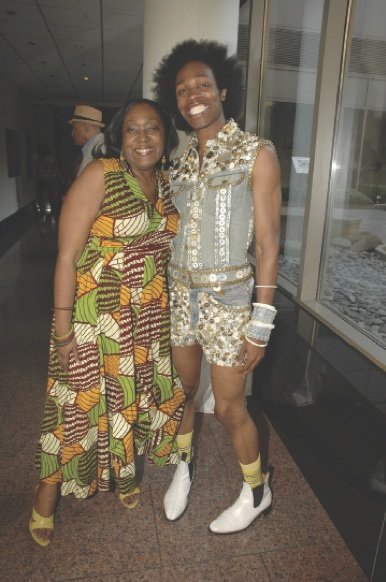 "This is an exhibit that focuses on African-American artists in Harlem to promote and encourage the work of new and exciting artists," Hayes said.

All of the pieces that were presented used materials that are normally used for everyday tasks. Woolery, born in Jamaica and raised in Morristown, N.J., tapped into his creativity by pinning together portraits of artists using only thumbtacks. One of his pieces, a portrait of Jay-Z, used 7,633 thumbtacks.

McCall uses decorative buttons, plastic and wool for inspiration. "I use buttons because back home, I was always in the basement, which happened to be where all the buttons that my mother and aunt had collected were," McCall said, "To this day, my mother still sends me buttons, and with them, I create art."

Simmons, an artist and public figure, helped make the event go smoothly. Known for his contemporary and ingenious art, Simmons heads up the Rush Arts Gallery, which is dedicated to providing opportunities for emerging artists.

"I wanted to showcase emerging artists, and this is a great opportunity to show their work to the public," Simmons said, "The artwork that is being presented is creative and fantastic--it just shows that art evolves over time."

Members from the community enjoyed themselves as they engaged with the art pieces and indulged in conversation with food and drinks. The artists were among those mingling, so those who were curious asked their questions and networked for hours.

"The artwork is really outside the box. It's a level of disbelief--who would have thought [it was] pushpins? So many pushpins! The materials are amazing and inventive--something I definitely didn't expect," Sonia Barnett said.

By the looks on the artists' faces, they were all overjoyed at having an exhibit that showed off their talents.

"This is the best show I have ever done. I have people coming up to me who are just mesmerized by what I do. Just to be called an emerging artist is outstanding," said Frederick, who specializes in pop art inspired by modern-day street artists.

The art pieces used a lot of recycled materials. Williams uses various media forms like fabric dyes, acrylic paint, plastic mesh and even teabags to create her work. Whitney Houston was featured on one of the teabags at the exhibit. This exhibit reminded not only those who came to support but the artists themselves to always think outside the box.

Hayes is planning on having more exhibits of African-American artists at Strivers Gardens Gallery. The next event will take place on Sunday, Aug. 12 at 3 p.m. at the gallery.

For more information on current and upcoming exhibits, visit www.souleouniverse.com or striversgardensgallery.vpweb.com.