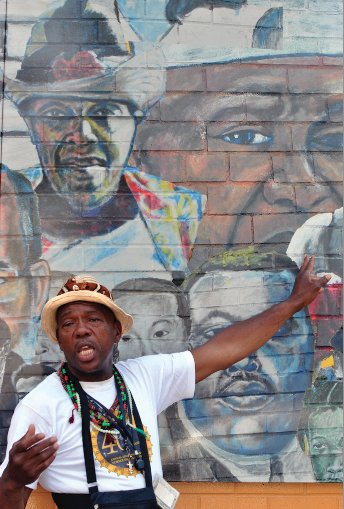 When walking around Lefrak City with Freedom, it's hard not to notice the love the neighborhood gives him. Passersby frequently shake his hand, shoot the breeze and shout out "Freedom!" from across the street. To the Bedford-Stuyvesant transplant though, it's nothing but expanding brain power.

"Knowledge is infinity, it's always to meet more and more people in Lefrak," Freedom says as we walk down 57th Avenue.

Having lived in Lefrak City for a quarters century, the proud activist is not only a community staple, but just one of many giving back to that community. Freedom hires talented artists from all over New York to help him paint murals on the walls of businesses in the area, specifically walls featuring wanton, cluttered graffiti. He was instrumental in the creation of the murals at the Food Bazaar and has his eye on a wall with clustered tags on 96th Street and renaming it the "Music Wall" as a tribute to musical legends such as Billie Holiday and Nat Turner.

"[It's] to bring up the community, give them something to look at. They're taking the walls and then marking up graffiti and all that. I'm against that. I'm here to destroy that. And once they see my art, they'll say, 'Oomph! Freedom was here,'" he said, motioning to the mural behind him, which originally filled the entire wall.

He was instrumental in the mural's completion in 1994. When a Popeye's replaced the previous store, the mural was painted but later taken down. The fast-food chain, recognizing its importance to the community, later restored the mural in a compacted, hanging form. In the far right section, near paintings of President Barack Obama and Kenny Anderson, is Freedom's own face. According to him, this particular block is named in his honor as well.

"If you look around Lefrak City, it's a very beautiful community. We just have to get out and stop the violence," the former paperboy for the Amsterdam News said. "Violence will always be here, but maybe a little art might change their thinking capacity. I was a child out of the street and I had the old timers to wake me up."

The Nation of Islam member doesn't want people to think he despises graffiti art, though. Walking us across the street to another wall filled with RIP messages and a small shrine to a local young man recently shot to death, he makes an exception here. This wall is also getting a Freedom-style remake and will feature pictures of young people killed much too soon with the tags intact.

"This right here, this is a young boy who just passed away," Freedom noted. "I respect the dead, and all the young kids wrote all over the wall. Out of respect, I don't wanna take the art out of this, because there's art in it. Art is art. You don't destroy art."

Another block over, we find ourselves outside the Food Bazaar. The sidewall features a mural of King Tutankhamen and a stone mask face, with messy graffiti tags spliced in between. It's set to become the "Falling Soldiers" wall sometime this year. When it's done, other departed "kings and queens" will join King Tut.