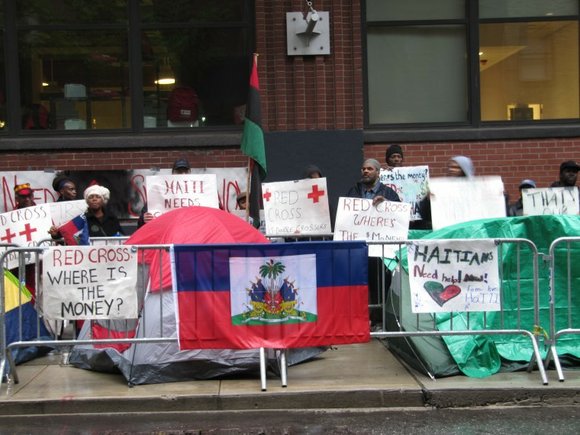 A strong contingent of international activists have proclaimed that the kidnapping and deposition of Haiti's democratically elected President Jean Bertrand Aristide by U.S. Marines; illegal, French-led economic sanctions that devastated the development of Haiti for generations; and Western aid organizations pilfering earthquake relief donations all amount to war crimes and human rights abuses.

The Friday Haiti Relief Coalition will hold a Haiti Update Forum on Friday, March 2 at 6:30 p.m. The forum will be held at Sistas' Place, 456 Nostrand Ave., Brooklyn.

Speakers will include international human rights attorney Roger Wareham and Gregory Perry of the Friday Haiti Relief Coalition. Video footage of the International People's Tribunal (IPT), which was held at Columbia University's School of Law in January, charging the U.S., France, U.K. and Canada with war crimes and human rights abuses will also be screened.

"The IPT was held to confirm our right to prosecute the accused and lay out the evidence of the war crimes committed by these Western nations against Haiti, as well as Libya, Cte d'Ivoire, Zimbabwe and Black people in the United States--war crimes as defined by the United Nations charter and the International Criminal Court (Rome) statute," Wareham stated.

The December 12th Movement International Secretariat plans to take a large delegation to the International Criminal Court (ICC) in the Hague, Netherlands, in June to submit the IPT findings and demand prosecution.

Following the highly successful IPT, the campaign continues to try and take the U.S., U.K., France, Canada, Italy, Spain and other NATO powers to the ICC. On Jan. 14, the judges at the IPT ruled that sufficient evidence had been presented on war crimes and human rights violations committed by the Western powers in Libya, Haiti, Cte d'Ivoire, Zimbabwe and the U.S. to move forward to the Hague.

On Monday, March 5, the December 12th Movement International Secretariat will hold a preparatory meeting for the ICC campaign. Wareham told the AmNews, "We will review the findings and view Dr. Molefe Keti Asante's powerful opening statement to the IPT; give updates on the current situations in Libya, Haiti, Ivory Coast, Zimbabwe and the U.S.; provide travel information for those who wish to become part of the 'ICC 400,' which will make the historic journey to present our petition at the Hague, Netherlands, on June 18; and set out work to be done by those who support the campaign but can't make the trip to the Hague."