Response to the response: 'By Any Means Necessary' continues the conversation 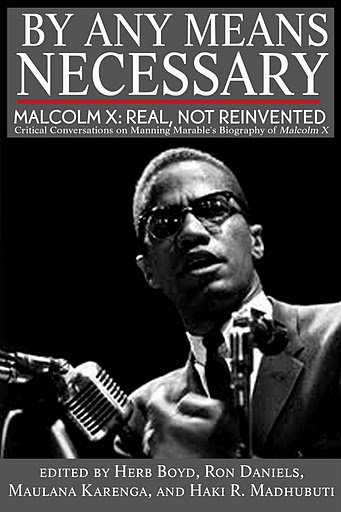 Response to the response: 'By Any Means Necessary' continues the conversation

It's not often you can claim that one book's existence is solely the result of another book being published. But that's exactly the case when it comes to "By Any Means Necessary: Malcolm X: Real, Not Reinvented."

Edited by Ron Daniels, Maulana Karenga, Haki R. Madhubuti and the AmNews' own Herb Boyd, "By Any Means Necessary" finds its strength in not being just one voice answering Manning Marable's "Malcolm X: A Life of Reinvention," but many voices critiquing the late author's suggestions and implications in the controversial, posthumously released work.

However, Marable does receive some praise for starting the conversation in the first place.

Marable claimed that Malcolm exaggerated his criminal past, discussed the activist's sexuality in a way that annoyed some of his advocates and casually tossed off government spies and COINTEL-PRO activities as normal for the lives of Black activists. But all of the essayists in this book find redeeming qualities in Marable's book that paint Malcolm as a whole person rather than just a caricature of righteousness, which appealed to a writer like Ta-Nehisi Coates.

In his essay, "The Legacy of Malcolm X," Coates credits Marable for opening up the conversation and talks about his personal relationship with the man and his work. He also cuts Malcolm slack because the America he grew up in is slightly different than it is now.

"What animated Malcolm's rage was that for all his intellect and all his ability and all his reinventions, as a Black man in America, he found his ambitions ultimately capped," Coates wrote. "The right of self-creation had its limits then. But not anymore. Obama became a lawyer, and created himself as president out of a single-parent home and illicit drug use."

Jelani Cobb's "Malcolm, Redefining Biography" essay admits that the Nation of Islam, while calling white people "devils," never advocated violence against them but repeatedly used violence against Blacks as a means of discipline and squashing dissenting opinions.

But not all essays were appreciative of Marable's work. In Glen Ford's "Dragging Malcolm X to Obamaland," the writer accuses Marable of trying to "cage Malcolm while assuring us that the revolutionary Black Nationalist was 'tentatively' becoming a liberal reformer." Ford calls Marable out for trying to "invade" Malcolm's mind and imply things that aren't there.

Much of the reading in this book is an exercise in openmindedness and the ability to have a truly academic and colloquial conversation about a man millions of people hold near and dear. Those conversations can get heated but will ultimately do the group good. "By Any Means Necessary" is required reading for anyone slightly interested in the uproar over Marable's opus.

Malcolm X's life, whether seen through the gaze of an early 1990s African medallion-wearing youth or of a historian looking to challenging the myth and legend, will always stand at the intersection of Black manhood, sexuality and politics in a way no other figure will in America. It's complicated, it's messy and it's confusing, but "By Any Means" (and by extension "A Life of Reinvention") proves that avoiding the conversation isn't doing anyone any good. It must be tackled head-on.