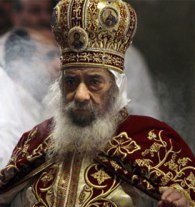 Mar. 20 (GIN) - Amidst much sobbing and wailing, followers of Pope Shenouda, the spiritual leader of Egypt's Christian Copts, packed the St. Mark's cathedral of Cairo for funeral rites after which the deceased church leader was flown to the Nile Delta northwest of Cairo and buried in a remote desert monastery.

The 88-year-old pope died on Saturday. Copts make up 10% of Egypt's population and are the Middle East's largest Christian community.

Thousands greeted the motorcade carrying his body, and military police struggled to control the mourners trying to get into the monastery.

The patriarch spent more than three years in exile in the 1980s when the late Egyptian President Anwar Sadat accused him of fomenting sectarian strife. He was laid to rest in a white marble tomb with a cross on top.

"The Holy Pope was able to gain the love of even those who held different opinions and I believe this will be a difficult thing to replace," said Samir, one of the mourners.

There is no timetable yet for finding a successor, who will be elected by a conclave of senior bishops.