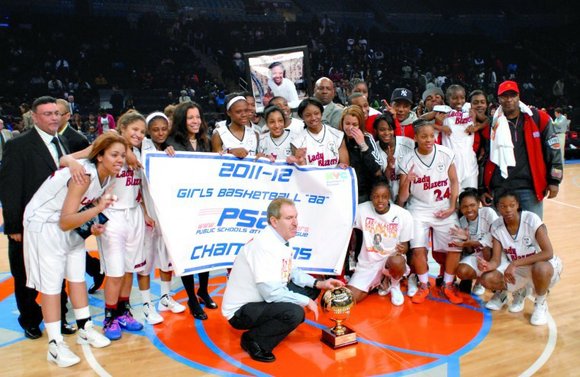 The names associated with the history of Boys and Girls High School basketball--once known simply as Boys High before gender integration transformed it into a co-ed institution--are those of New York City lore. Lenny Wilkens, Connie Hawkins, Mel Davis and Pearl Washington, to reference a few. Now, another name has been added to the illustrious history of the program.

Ruth Lovelace, who has obliterated the proverbial glass ceiling of the male-centric boys' high school basketball establishment, is arguably as significant as any of the aforementioned men to the legend of the Bedford-Stuyvesant school. Lovelace etched her name among the great coaches in scholastic hoops--in any era, anywhere--by leading the Kangaroos to their third consecutive Public School Athletic League Class AA title, with an intense 71-67 victory over Thomas Jefferson High School. She is the steward of the first Boys and Girls High School team to win three straight championships.

"You never think this can happen," Lovelace said at the post-game press conference. "To win three in a row and be part of history is special...I just owe so much to the guys that played for me over the three years to make this possible."

On this day, seniors Rashard Andrews, who scored a game high 26 points, and Leroy "Truck" Fludd, who contributed 17 and a strong defensive effort, were the guys most responsible for the victory. They outdueled Jefferson's formidable tandem of senior Thaddeus Hall and junior Jaquan Lynch, who dropped 17 and 18 points respectively.

Fludd said his matchup with Jefferson of East New York was personal because of the verbal gamesmanship initiated by the highly recruited Hall. "He was saying [leading up the game] that I couldn't guard him and that we couldn't beat them," reflected Fludd. "I was hyped. We were all hyped."

"Nobody likes to lose to no woman," said Jefferson coach Lawrence Pollard lightheartedly, as he is acutely aware that Lovelace is more than just a woman--he was defeated by a legend.