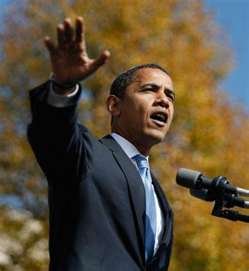 President highlights the importance of Memorial Day in weekly adress

One of two tendencies will carry the day as justices of the U.S. Supreme Court hear arguments for and against Obamacare, or the Affordable Care Act. The three-day hearing was scheduled to end yesterday (Wednesday).

Will the justices take the ideological route, with the court favoring those opposed to the act, or accede to the parties favoring Obamacare, thereby allowing established law and Congress' act to command the moment? That moment may not arrive until sometime in June, as the justices discuss whether the mandate that everyone be insured remains a law.

Early indications suggest that Chief Justice John Roberts' court will decide as it did in more recent controversial cases such as Citizens United and Bush's victory over Gore in 2000--that is, 5 to 4, with the votes of Justices Clarence Thomas and Anthony Kennedy as the deciding factor.

It's perhaps folly to speculate on the swing vote of Kennedy, since he is known to blow hot and cold, and there are some who feel he will vote in favor of the act, hewing to popular opinion. How that will play out for Obama as the election moves into high gear is anybody's guess.

If recent polls are reliable barometers, the American public does not like the mandate that punishes them if they don't have health insurance. One out of six people in the nation are without health insurance, some 50 million people, and if the act is ruled unconstitutional, it would rip out the core of the plan and renew a concern about young people who are carried on their parents' insurance and coverage of anyone with pre-existing medical conditions.

Last week, a Washington Post/ABC poll indicated that 42 percent of respondents said that the Supreme Court should invalidate the entire law, though 25 percent favored keeping the law while throwing out the individual mandate.

Many critics of the mandate, a sizable contingent of the left, feel that Obama put too much political capital in health care rather than focusing on the deplorable unemployment situation in the country. Even so, it got through Congress and now it is a matter of the law's constitutionality.

A recent New York Times editorial succinctly explained the differing views on the issue, insisting that it has been improperly framed.

"That view wrongly frames the mechanism created by this law," the editorial contends, referring to the constitutionality of the mandate and how it impacts the economy and the individual. "The insurance mandate is nothing like requiring people to buy broccoli--a comparison Justice Antonin Scalia suggested in his exasperated questioning of Solicitor General Donald Verrilli Jr. Congress has no interest in requiring broccoli purchases because the failure to buy broccoli does not push that cost onto others in the system."

The usually perceptive and insightful columnist Ross Douthat believes that Obama could gather more political gain from the defeat of the mandate than its success. That logic is based on the acceptance of the minor provisions of the bill and the rejection of the mandate, though to reject the mandate would appear to eviscerate the act.

It may all end with some sort of compromise, with the court throwing out the constitutional argument and adopting the other provisions. This gets us right back to where we began on this matter, and again, the conclusion of the Times' editorial may be the best answer:

"If the Supreme Court hews to established law," the editorial concluded, "the only question it must answer in this case is modest: Did Congress have a rational basis for concluding that the economic effects of a broken health care system warranted a national solution? The answer is incontrovertibly yes."