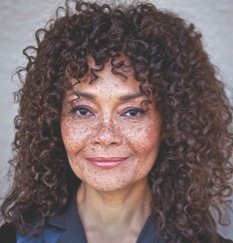 A French Guadeloupean filmmaker, producer and director, Monpierre was born in Guadeloupe but raised in Paris. Educated at the Sorbonne at the University of Paris, Smith College in Massachusetts and NYU in New York; she worked at the renowned ad agency BBDO before venturing into the world of filmmaking.

Byron Lewis, chairman of the African-American-owned Uniworld advertising agency, acted as a consultant on Monpierre's film.

Monpierre filmed the movie in her homeland of Guadeloupe, where the waters are clear and tropical clime so fair, the movie might serve to draw tourism to the beautiful, friendly isle.

"Elza" is the story of a young Caribbean woman in search of her father.

A semi-autobiography, Monpierre's film speaks on behalf of the many fatherless children and the fantasies they conjure about the fathers they never knew. The protagonist, Elza, seeks to make her deep desires, fantasies and dreams about the shadowy figure who occupies much of her thoughts a reality. Thus, she journeys to the lush island of Guadeloupe in the French West Indies to find the most important man in her life.

"I was very anxious to meet my absentee father," explained the producer of her own experience. "Guadeloupe is a small island where everyone knows one another, so I was able to find him. I was very excited and young, so perhaps I didn't handle it in the best way. I called my father. His wife answered the phone, and I blurted out that I thought her husband was my father.

"She was very nice and said she understood. She invited me to meet her children and my father. I guess I had many expectations. However, when I finally met my father, he looked at me and said he didn't think he could be my father because my hair was too kinky," recalled the petite artist of her only in-person encounter with her father.

"Our relationship never got as close as I would have liked. My father never recanted his initial comment to me and continued to behave in an authoritative manner toward me. He died a year later," recalled Monpierre with a haunted tone in her voice.

"I wanted to give Elza a more positive outcome than what I encountered in reality. I hope the film will prompt fathers to be in their children's lives," she continued. "I think it's especially important, especially with girls. I think I had a lot of low self-esteem issues. I never had a father to tell me I was beautiful, so I never felt beautiful.

"Oftentimes, when women do not have a positive relationship with the first man in their lives, they may not know how to interact with men and therefore can end up choosing the wrong men in their lives."

Monpierre has produced several documentaries, educational and musical videos as well as award-winning shorts, including "Rendez-Vous" and "Sweet Mickey for President." Her films have been screened at the Marrakech Film Festival, the African Diaspora Film Festival and festivals in Toronto and Cannes.

Monpierre wants to tell interesting and provocative stories and tales about women from an inventive and unique viewpoint as only she can. Her goal is to acquire the distribution and funds that will allow her to expose "Elza" and her other films to a worldwide audience.