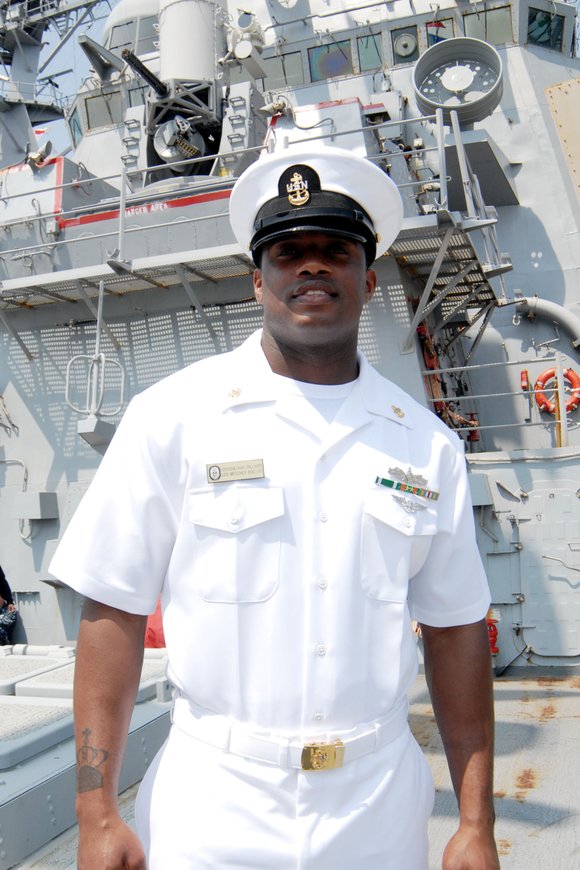 Thousands of military personnel from the U.S. Coast Guard, Navy and Marines are taking a bite of the Big Apple during the 25th annual Fleet Week. In exchange, civilians had the opportunity to explore the world of America's military sea services by touring military vessels and attending air shows and other demonstrations over the Memorial Day weekend.

Kicking off last week, Fleet Week activities wrapped up on Wednesday. Over 20 vessels, including the USS Wasp and USS San Jacinto, participated in the Parade of Ships rolling into the city, docking at piers in Brooklyn, Manhattan and Staten Island.

One of those ships was the USS Mitscher, which was docked in Staten Island. The vessel, a guided missile destroyer, carries a long history of life on the seas and various missions, but it's the leadership of the ship that's making waves.

Monika Stoker is the USS Mitscher's commanding officer and the first African-American female to command an AEGIS-class destroyer. Running the ship, which has 287 personnel, she is only one of five women on the vessel.

Only on the job for three months, in an interview with the AmNews aboard the USS Mitscher, Cmdr. Stoker discussed her journey through the Navy, starting with her graduation from the U.S. Naval Academy in 1995.

"I had a scholarship to college to major in electrical engineering," she said. "When the Naval Academy became an option, my dad told me to see what happens. I did, and here I am 22 years later.

"In 1994, they changed the combat exclusion law. At that time I was at the academy and wanted to do civil engineering corp. In 1996, I was one of four women on the USS Kearsarge."

Currently at the start of her first tour as a commanding officer, Stoker is a wife and mother of two daughters, ages 4 and 5, who live in Norfolk, Va. The longest she has been away from her girls is seven months, but she sends them packages every week. When it comes to diversity in the Navy, Stoker said that there is still some work to be done.

"We as Americans are not that far removed from segregation. As long as there are grandparents and great-grandparents out there who have had bad experiences in the military, it's not going to get better as fast as the military would like it overall," said Stoker.

OSC Clifford Dillard from Montgomery, Ala., works in navigation and commutations on the USS Mitscher and has been in the Navy for 15 years. He has traveled to Japan, Russia, China, Malaysia and Australia.

"The people in the Navy have personality," he said. "We are so close-knit, it's a family environment. The Navy is like an extended family."

Donell Carr is a boatswain mate second class and makes sure the ship has everything it needs to get underway, including control of the anchor and upkeep of the ship. He's been in the Navy for five years. He was able to earn a college degree while serving.

"It was a great choice," he said. "It was either this or go to college, and I figured why not have both? I've traveled down the entire west coast of Africa, Jordan and Italy."

Petty Officer Michael Baker is a fire control man who is in charge of the weapons systems and radars on board. Baker serves as a Tomahawk missile technician working with land targets. He's served in the Navy for five years and is from Detroit, Mich.

"I chose the Navy for the educational benefits and I joined to travel. I've been around the world and I've seen a lot of places," he said. "I'm working on my associate's degree in mechanical engineering. You can go to school while you are on active duty."