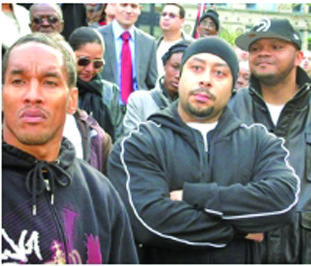 "In 1989, without any physical evidence, the NYPD and the district attorney's office--namely former Assistant District Attorney and fiction crime writer Linda Fairstein--railroaded five young boys to further their own careers. They spent a total of 40 years in prison. Today, Police Commissioner Raymond Kelly and the Bloomberg administration continue to stonewall justice and reparations for these victims of the criminal justice system," stated spokesman Omowale Clay.

The men, collectively known as the "Central Park Five," will move ahead in their quest for justice and reparations on Monday, Oct. 29, at 2:30 p.m., in a hearing in front of Magistrate Judge Ronald Ellis, Courtroom 18D, 18th floor, in the United States Courthouse, 500 Pearl St. in lower Manhattan.

On April 19, 1989, five innocent Black and Latino teenage boys were captured and arrested by the NYPD after the rape and beating of a white woman. She was an investment banker jogging in Central Park. Before they went to trial, newspaper headlines and television news broadcasts condemned them. They were convicted and spent six to 13 years in prison following a case reminiscent of the Scottsboro Boys in Alabama 1931.

"I was 14 years old," Raymond Santana explained at a previous rally for the Central Park Five. "They called us animals 'wilding,' but we knew we were innocent, and we held our heads up. We lost many years, and we are still trying to catch up. This is not just about us. Sean Bell, Timothy Stansbury and Eleanor Bumpers were murdered by police. There are a lot more people going through what we did."

Clay exclaimed, "Even Donald Trump exploited them by taking out full page ads in major newspapers calling for the return of the death penalty for their case just to promote his own name. The police knew they were innocent, but they never really investigated the crime. Any Black or Latino boys would do. Matias Reyes, serving time for another rape and murder committed after the jogger attack, finally confessed to the crime in 2002. His was the only DNA found at the crime scene.

"The damage done to these men must be repaired now! We demand justice. We cannot let them criminalize our youth without a fight. We are all the Central Park Five."

"We were exonerated, and we want compensation for the years they stole from us," said Kevin Richardson, who could barely speak through his tears. "It's unusual to see a grown man cry, but we have been through so much. It was torture. We are putting our lives back together and taking care of our families. Thank you all for standing by us."

Kharey Wise, who spent 13 years in prison, made a brief statement thanking all the people who supported them through the years.

The civil case against New York City for the wrongful conviction of the Central Park Five has been stalled for over eight years by foot-dragging city attorneys. Justice for these innocent young men is long overdue.